Showing posts from May, 2019
Show all

The Blameful Two  The world broke as their hearts bled the shadows of their misery. Seeping upon the world, flooding with the scars of agony. Their eyes trembling beneath the moonlight as their blood stained hands shimmer.   Their lips sewn as each is caught in a lie. Both bare, exposed to their duality. Their curtains drawn thus unmasks the bodies they have slain. The skeletons of truth dragged through the spoils of deceit.  Each, unwilling to speak. Their cheeks flush in rose petals. Their skin taut to the anxiety of their arrest. They are now the victims of themselves and each the other.  Two hell's preached in the underbelly of their weakness. The fraudulent thought in avoidance of pain. And now they stand as nude as the beginning of life, Adam and Eve.  Shaking, they are without words. Silent, bearing only tears that fall to the blood soaked floors. The dark whirlpools of hypocrisy. Neither is without sin and neither is without murder.  Their souls weep dearly a
Post a Comment
Location: Marysville, WA, USA
Read more

I Had Forgotten     Red smoke plumes in the air. A brilliant, yet daunting sky of clouded crimson thickens the sky in sheets of billowed cotton. It rises with no sense to stop. The atmosphere frightens, yet heightens the senses with a strange tingle of pleasure.  We are losing our homes to the natural order. Yet I am not taken by tears, but by an odd joy of entertainment. For too long have I adhered myself to these pieces of physical wealth. Yes, through struggle, persistence and consistent efforts I have dawned myself with such rewards.  But for too long now, I have forgotten the path I had been taken. I had forgotten the many beads of sweat I spewed from the exhaustion to gain such things. I had forgotten the lonely misery I had fought. I forgotten the friends that lifted me, the moments that tore me down only to bring me higher.   I had forgotten the delicacy of a flower. The aromas of nature the beauty within myself and the beauty so naturally displayed around me. So m
Post a Comment
Location: Everett, WA, USA
Read more

A Wanderers Inn   I have been traveling for thirty days. My horses are weak and I thirst dearly for water. My belly aches as hunger constricts my gut. I am fearful of death in such an unsuitable way. I have always seen myself dying in daring act of life.  Be it in war or the saving of a child. Or maybe, even in the defeat of a dragon as I get one last blow with my blade before it strikes me down and it falls to its death beside me. Feeling its last breath of heat roll over my body as our eyes see only our fading souls.  I have always thought my death would be glorious. Yet here I am, traveling alone with no more rations, nor water. My horses no longer walk with fervor but lackadaisical steps. And so I pray to find shelter before the cold takes us. Before the empty plains of barren trees and darkness finds us.  I wish not to be detritus before my days. Decaying slowly to the maggots as my body lays helpless upon the earth. Becoming a gruesome vision of what lies inside. B
Post a Comment
Location: Marysville, WA, USA
Read more

The Moles Never Learn  I found myself walking in the snow, my head aching with a sharp pain. I feel the back of my head, there is something crusted upon the rear of my skull. I dig my nail carefully into it. I can feel the crust collect beneath my nail like dirt.  As my feet trudge through the sixteen inches of snow I look to my nail and there in my nail is blood. Dried cells of my body. Upon seeing this I become confused with worry. I place my hand once again upon my bloodied skull and began to examine it.  I slide my index finger like the bristle of a broom, back and forth trying to see what wound had allowed such blood upon me. But after several seconds of feeling about, I find nothing. No scratches, no lacerations, nothing.  My worried confusion musters down to mere confusion. I rub my eyes as I am strangely held with a slight daze. As if I have been interrupted from a deep sleep. And the evening air is not helping my situation.  I am comfortably wrapped for a day tr
Post a Comment
Location: Marysville, WA, USA
Read more 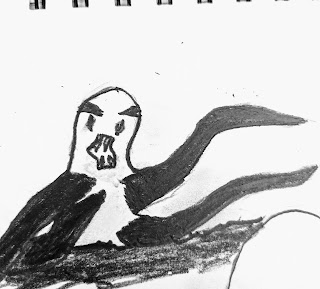 The Harbor Beast    There we stood at the harbor, our weapons drawn. Our hundreds of ships shredded like veal to the tortures of a fork. Screams of men echoed through the thickly laid fog. Every man's heart beat could be heard that day.  Our bayonets branded upon our guns. Others stood with swords drawn, but what good were they? What good were any of us?  The desolation that floated among the harbor waters, was as if the wrath of god had rained down, and it was teaming with horrors. You could hear the screams of men vanish to silence as if death had rose from the water. And the most haunting thing of that day still rests in my head like a scar upon the flesh. One of my men, my own son, aboard the ship I was designated for had swam to the very dock we stood upon. But as I and other men tried to save him, something took him. Something powerful, something beyond our eyes.  In one foul second we lost our grip and he was taken under with ease. His face pale with fright,
Post a Comment
Location: Marysville, WA, USA
Read more 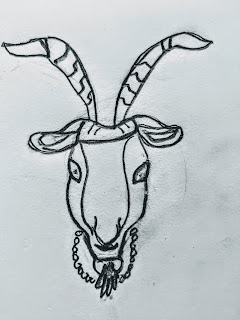 The Council   I stood in the door way as Count Dreygon lit the candles. His long neck stretching over the wax hugged wicks. Lifting a match so carefully as not to disturb the flame even the slightest. It was odd, how he wished us to be in silence the moment we reached this cathedral like structure.  Our conversation prior had extended from his stead to the very entrance of the building. Before we entered, he turned from the door way placing his index finger upon his lips in gesture to keep silent. I had no reason to not agree nor be concerned. As I had agreed to meet those that had helped him to obtain a position among the council.  His mentors, I was told. And I, one with ambition to be a part of the council was willing to do as Count Dreygon asked. So my ambition and curiosity have drove me to this very chapter of my life.   As I stand in the doorway, a draft of wind soars into the building with what feels like the need to be noticed. The wind is strong enough to
Post a Comment
Location: Marysville, WA, USA
Read more

A Returning Love The aroma of tea tickles the air as I wake with the embrace of a morning sun. Stepping out of my bed tossing my sheets from their grasp. I make my way to the view from my window. The soft touch of snow had settled upon the grounds in the silent wisp of the night.   It's a spectacle to behold. A pleasure for the eye as the dim barren ground beneath it is no more. But I can't help but think of him. I can't help but remember his virile touch. How it gives me such comfort, such protection. His smile of ivory and his scent that raises me with elation.  Our time spent apart has been difficult but, he is living his dream, his sought after passion and how dare I ever be one to wish him to fray from it. All for the sake of my own need of him. We are both creatures that have clung to our dreams with great vigor.  Neither has left the side of our hearts and we are each formidable in our arenas. We shall never back down though many nights are cold, al
Post a Comment
Location: Marysville, WA, USA
Read more
More posts