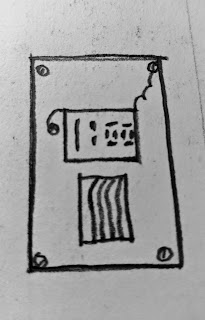 Time is running out, the bomb has only ten minutes left, what do we do?"  Says Jermaine as he looks to the weave of wires.

With his weapon in hand and keeping eye down the hall way from the exit of the room, Cash responds, "I don't know...I don't know."

Jermaine, staring at the bomb with beading sweat he looks over at their downed friend Cruise, his lifeless body lay slumped against the wall with his back. His head settled into his chest as blood dries from a wound just below his heart.

Jermaine looks back at the bomb, it's time ticking away, counting down their lasts breathes. Jermaine, rushes over to Cruises body and looks for the bomb diffuse manual, a small manual with overall tips for certain explosive designs.

Jermaine fumbling through Cruises body, "Maybe there is something on that stupid manual Cruise had." Wiping away sweat he reaches into Cruises left chest pouch and finds the folded up manual.

He unfolds the manual, he looks it over, every inch is scattered in marked notes and sectioned off diagrams. Jermaine, frantically looks over the manual for any clue, "Which is it....what damn one is it?!... Cash, you have any idea?"

Cash, quickly looks back as Jermaine holds up the Manual for him to see. Cash takes in the diagrams very briefly and looks back down the hall. "I don't know man, it was you and Cruise who went through the course!"

Jermaine, pulls away from Cash and peers over the bomb while holding the manual. His eyes darting back and forth between the bomb and manual. "Nothing seems to line up, this is all bullshit man, I only took the first course of class. After that I was sent overseas for an espionage course. Fuck man...fuck."

Cash gripping his weapon tightly with his eyes scanning the hall way he sees a shadow coming around the corner. "We got someone, figure that shit out man or we are screwed, can't call shit in till that things is....(a target leans from around the corner, Cash fires a few rounds.) Just figure the damn thing out, if you have to just cut a fuckin wire, we are running out of time!"

Jermaine grabs a pair of scissors off his vest and lingers it over a wire. A bead of sweat falls from his face landing at the blade of the scissor splitting into two. Jermaine's heart is beating so rapidly he can slightly see his vest shiver to the beat of it.

Cash, popping off shots down the hall way, "They found us man, hurry! Do something, blow the damn thing up if we have too. I ain't letting these fucks take my life, it'll be my damn choice when I go!"

Jermaine, hovering the scissors, he looks from wire to wire, eight wires hang connected to the bomb. Only a third don't match each other. "I don't know what to cut Cash, what the fuck, this is fucked man...fucked!?"

Suddenly a few rounds shatter the windows to the right of Jermaine just above Cruise's body. Jermaine jolts for a moment and picks up his rifle that lays beside him. He aims to the windows and realizes it is coming from the outside at ground level.

Just as he puts his rifle down he hears the rapid fire of a machine gun go off. Rounds start to hit just passed him in the room. With no where to go he covers the bomb with his body. He quickly shifts his body over the bomb and places himself so he can see down the hall as well.

Round after round snaps over him. Cash is laying prone as well, "I am running out of ammo man, I don't know how much longer we can hold. Just cut a damn wire and pray for the best!"

Jermaine, looking down his sights, his heart leaping from his chest and the bomb ticking down. He looks at the timer, "We only have three minutes left...fuck bro, I guess this is it, do or die\!"

The sun starts to creep up from the horizon, the dimly lit room and hall slowly become pierced by the glowing sun. Beams of pumpkin light break through the windows, revealing the dusted atmosphere.

The walls are tattered by years of war and lack of attention. You can't tell what bullet holes are new and which ones are old. The building is riddled with holes like Swiss Cheese. Jermaine, still looking down the hall as gunfire blazes over him.

He looks to Cash and as he does, he sees Cash get hit. A round from the machine guns hits Cash in the right shoulder. Cash feels the round hit, "Fuck....I'm hit man, come on! We can't let these fuckers get us, either we kill them or we all die together, you're choice Jermaine!"

Adrenaline courses through Cash's veins like a flood through a coastal village, the bullet wound causes him to lose little focus.

Jermaine, curates his body to see the bomb more clearly, "Ha, you would leave the responsibility to me, fuckin asshole, you never change do you?" A grin sits upon his face as he grabs hold the scissors.

Cash, still firing down the hall way, "Hell no, I like being an asshole, it gets shit done!" A wide smile covers his face as he carefully injects rounds down the hall at the enemy.

Jermaine looks over the wires once more and over at the manual, he sees what could be a related diagram to the bomb he is looking at. "Well, (hovering the scissors over a wire,) One minute left, here goes nothing. Have a good after life Cash."

Jermaine squeezes the scissors tightly over a wire, it snaps in two...........

Jermaine, "Fuck, I think I did it! (looking at the timer), the timer stopped...shit!"

Cash, "Well, lets light these mother fuckers up... call it in."

Jermaine puts down the scissors and grabs his radio. "Panda White, this is Panda Black, do you copy?"

Jermaine, "Bomb is diffused and we are ready for fire over."

Panda White, "Roger, ready for fire, choppers are already in the air. They shall be directed to your coordinates break....what is your location over?"

Jermaine calls back to Panda White and gives his location.

Panda White, "Roger that, you'll have birds on site in five mikes over."

Jermaine grabs hold his weapon and takes up position with Cash, "Lets give em hell!"
Cash looks over at Jermaine and nods. The sun has now fully enveloped the building, rounds are being fired from outside through the windows behind them and the windows in the hall. Enemies are crawling through the building like ants.

A few more intense minutes go by and suddenly all becomes silent. A few bodies at the end of the hall groan from bullets wounds. Jermaine and Cash slowly stand up. Jermaine grabs Cruises body by his rear plate loop as Cash stands up. They stay ready as they press down the hall.

Chopper pilot "Black Panda, this is Savior Three, it appears you are clear to exit the building for exfil, We already called it in, break...exfil ETA, ten mikes we will remain present till arrival. Good job down there guys. Savior Three out."

Jermaine walking beside cash, "Roger Savior Three, Lima Charlie."
---
There are those out there doing what most will never do nor ever wish to do. Let us not forget what is going on in the shadows for the safety of our freedom.

What have you done to keep yourself grateful of our freedom here in America?
A Man's Traveled Heart

One's character is open to change,