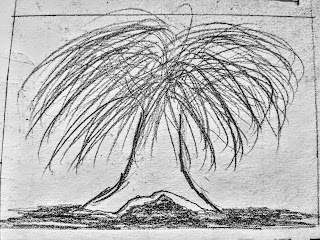 
Everyday Carry Barden lays beneath an old oak with a book in hand. Here eyes are of golden brown and skin of galaxy cream. Her hair hangs like gentle threads of cotton. Everyday her eyes glow as she turns the pages of her book.

She savors every droplet of imagination presented before her. Her hands gentle, tickling the corner of the page just before turning it. Her face explores with vivid expression, no emotion is left without notice.

Tears, smiles, and joyful laughter spring from her. Tension of anticipation clasps to her chest leaving her of shallow breath. Her face with grins with anger as villains swarm many pages of her books. Their deceitful and vile ways plunge Carry into a imaginative rage.

Playing out thoughts as to what she would do. Pretending to conjoin her reality with the book. Stretching her imagination not only within the book but within her world. Creating side stories in her head. She even plays them out on her walks home.

Detailing her emotions, her thought with great precision. She found herself enthralled from such an early age for books. Often she was found hidden beneath her bed late at night with a light and book. Only to have her mother or father guide her back to sleep.

Carry was never physically adventurous, but she is surely mentally adventurous. She has climbed mountains so high, not even the wings of dragons can reach. She's battled demons so ferocious, that even the devil himself would fear.

She's built kingdoms, cities, luxurious hotels with assorted characters. From, strangers of space to earth dwelling elves. She is no stranger to the capability of her imagination. She is no slouch when it comes to touching the deepest emotions of her heart.

She will express herself graciously with each word she reads as it rolls gingerly from her tongue. Each syllable of her most favorite words are relished like candy. Like sugar melting upon the lips, only to be licked with great craving.

Her eyes never leave a book alone till it is finished. Till the once pristine cover is clearly worn like the book itself had fought off danger. Smudges, scratches and bends are found on every book she owns. Well loved be her books.

They are everything and in her darkest of times, books are her greatest companion. They built her up, sheltered her from storms and sailed her faithfully to shore.

And there came a time when these sailing words were most needed. For on unexpectedly tragic day, Carry was struck on her way home by a drunk driver. Only twenty years old, on a summer evening, the sun still hanging high. The orchards still glowing with fruits. And the town still buzzing with people.

But a fool took to his poison, his false remedy and took to the streets. His eyes heavier than the earths pull. His vision blurred as if he was beneath water. His words as slurred as a drunken sailor.

And on this tragic summers day, Carry's ability to walk was taken from her. She was paralyzed by a mans uncanny ability to drown himself in pity and slay the loving steps of a young girl. And though Carry sat idle upon a wheelchair, she does not stop herself from the boundless words of books.

Ten years later, after much imagination, much struggle, much vivid realization of her heart. Carry gained back her legs, not fully, a cane be most of her. But her family is now her everything. She now walks herself to the tree daily to read beside her daughter.

She now smiles unlike she has ever smiled. She laughs, cries, yells, screams, loves, dances, and reads like she never has. Every letter she touches with her fingertips, her eyes, she sees as a gift. For all could have been taken from her.

But she was graced with a second chance.
--
Would you stop a passion of yours in the wake of a tragedy?

We often bound ourselves to our past and forget we to cut to a new one, A Man's Traveled Heart