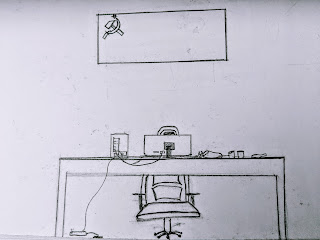 He sits snarling at his monitor as he reads out his comment. His skin boils with rage as he commits his virtuous act. "A few more changes and it this should shut him down!" he says as his glasses sit snug against his face reflecting the luminous screen.

He scans through his comment a few more times before submitting his textile thought ensnared in outrage. His greasy hair hanging well beyond his shoulders. His skin glistening like spilled oils beneath moonlight.

His fingers tapping gently upon his keyboards as he reads his words as is Shakespeare himself has written them. Carefully examining each and every word. "I'll show him, that bigoted asshole. I'll tear him a new one. His Nazi driven words shall be thoroughly criticized out of existence.  His hate speech drivels with such endless ism's. How dare he be given a platform!"

His eyes piercing into every word of his comment as if to frighten it into truth. His right index finger hovers ever so slightly above the enter key. His heart pounding, his snarky smile glares off his screen. He fills with righteous euphoria. He licks his lips as his finger hovers.

He becomes slightly nervous, he starts to lose any confidence in himself and his choice of words. Losing his momentum, he decides to reassure himself. He glides his hand from the enter but over to his mouse.

He wraps his unkempt hand over his Doritos residue riddled mouse placing his index finger upon the middle scroll. He guides his tempered eyes through the existing column of comments. Sniffing out the perfect one, a few seconds goes by and he freezes. He has found that confident comment to reinstate himself. Beside the comment is a picture of a girl, her hair clearly worn thin from excessive blue dye glares with smugness wearing glasses two sizes too large.

He lifts his hand from his chip soiled mouse and slides his finger across the screen as he reads the all in caps comment. A snide smirk stains his face as he reads it. He can't help now but feel empowered, feel, vindicated.

Lowering his hand upon sufficient reassurance he wipes clean his hands on his red shirt bearing a hammer and sickle. Reassured of himself and his comment he scrolls back up to the video he just watched. The timer reads, three minutes out of twenty.

Beneath the time bar sits his comment. Patiently waiting to be thrust into the internet for all to read. His heart fills with vengeance and festoons of wild fantasy. He sees himself displayed upon the multiverse of the internet as a hero.

He sees himself glorified, his arm bent inward with a fist as he stands before a crowd. Calling out the vile presence of wrong doers. He sees himself righting every wrong these malice cretins have ever done. He sees reform at every corner.

His fantasy swells with such contempt, such spiteful energy. Lustfully biting his lower lip in pleasurable thought, he places his hand back upon his mouse as he glares intensely at his monitor. His room lit only by the monitor he feels untouchable stowed away in his room.

"I will surely be right! I am right! Always, this jerk...no....this racist sludge knows of nothing. He lacks understanding of those different than him. I'll show him. My words will strike him from his platform and we shall rise up like roses among filth." He smirks while guiding his mouse over the comment button.

Raising his chin as if to pride himself with legitimacy he clicks the comment button. He is now on the internet, known as, SocialJusticeHammer. Instantly his comment is printed upon the screen. He looks to it with delight, his ego flares.

He brushes back his hair as he sits and waits for a response. A few minutes pass, nothing, thirty minutes pass, nothing. An hour passes still nothing. He is starting to become impatient. He starts to wonder why no one is responding. "They must not understand...or....or....they are afraid. Yes, afraid to response to such a well thought and well formulated statement. Marx would be proud of my interjection of thinking."

Sitting, he begins to worry more, but no matter. It is merely a matter of time before their is a response. Suddenly there is, an alert pops up. He sits up in his seat and eagerly clasps his mouse and drags it to his comment. Below it reads, "response 1"

"Ha, what fool thinks they can respond to this?!" Excitedly, he clicks on the reply button. It expands with haste and there it is, his first response.

He looks to the comment without any mind to the respondents icon. And the response reads, "Cool story bro, maybe move out of your moms basement."

SocialJusticeHammer becomes infuriated, his rage spills from his ears. He slams his hands upon his desk. Empty bottles of soda topple over. A bag of open chips spills onto the floor. He clenches his hands into fists and without hesitation he expands his white knuckled hands and begins to type.

Typing as he speaks aloud his all consuming fury is transferred from thought into the free roaming internet. "I'll show him, cool story bro?! Do you not get what this Nazi is saying? Do you not get the hate he is spreading? You plaster your flag of hate, of racist and bigotry with no thought of others. Without thinking of the pain it has caused so many! You should be thrown to exile for such lack of empathy. Your hate is a nuisance to this world, no....an abomination!"

He types and types and types he rushes his fingers across his keyboard with precision. His warrior mentality of social justice fires on all cylinders. And in the middle of his typing, his bedroom door opens and from the darkness shines a thin expanding beam of light accompanied by a soft voice.

Hearing the voice he becomes upset by the interruption of his mom. "What the hell mom, I am trying to work here can't you see?!"

His mom, ducking behind the door, "I am sorry dear, when ever you are ready come out and join us."

His mom closes the door and the room becomes a shroud of darkness once again. A chamber of secluded genius. He turns his attention back to typing and in that short moment of interruption, he looks to his new and unfinished comment. And above it rests the respondent's comment, so viciously it attacks him, it unsettles him.

Feeling outraged and triggered he angrily looks over at the reply likes and there beside the like button, sits two hundred likes. He becomes even more angry, a tinge of jealously and bewilderment erupts from his mind, "In that moment of my moms interruption a swarm of Nazi's must have converged to take me down. They won't stop me!"

He starts to type again, as he does, the likes of his respondent accumulates. Each new like chips away at SocialJusticeHammers ego. It demoralizes him bit by bit. Till all logic is torn from his mind and all that remains is the emotion of resentment.

He can take it no more, his fingers become useless appendages. He can no longer finish his comment. He is overwhelmed by the defeat of his words. He starts to weep, his once triumphant and warrior mentality is stripped away. Tears roll down his face as his lips quiver like curtains in the wind.

And in his emotional turmoil he stands up in surrender and runs out of his room weeping for his mom calling out for the comfort of pizza.
--
Some people take the internet too personally!

Do not seep anger or resentment without evidence to persecute , A Man's Traveled Heart

Thank you for your support. I hope you can share this with others.