Alec and the Unexpected Beast 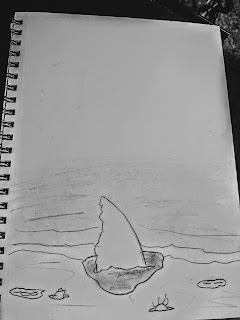 Alec and the Unexpected Beast

The ocean is calm, the morning fog settles thick as the tide is receded into the distance. Young Alec is out collecting seashells to bring back to his mother, so she can make decorations for the home. As Alec collects shells, he sees something poking from the earth.

It looks as if a Dorsal fin sticking from what appears to be a shallow pool of water. Alec, with his curiosity he ventures toward the object. On his way he collects shells he thinks his mom will like. He places them gently in a satchel his mother made by hand. Its hand sewn fabric is worn from the many adventures of shell collecting. You can see shells piercing the lining of the satchel.

Alec reaches near the possible dorsal fin. As he approaches he keeps his eyes on it as he places one more shell in the satchel. The cold air becomes more frigid as Alec nears the foreign object. Nearing it, he decides to place down his satchel of shells a couple yards from it.

Alec then takes the required steps to reach what he believes is a fin of a large fish. Then, as he is only a few feet away, he sees it move. Alec steps back a moment and can clearly sees it is a fin of some sort.

Alec reaches out carefully, as he leans his body over the pool of water where the fin is. Alec admires the gleam of the grey toned fin. Ocean water softly sprays upon the fin as the calm waves splash upon the receded shore.

Just as he reaches to feel the fin, he looks down. As he looks down he sees the pool of water has no bottom. He can see no signs of a floor. Alec then retracts his want to touch the fin. As his fear of drowning over takes his thoughts.

Alec then leans back and stands up and continues to examine the water, but from a safer position. He squats down and slowly touches the water with his finger. A small ripple forms from his finger breaching the still water.

Doing so, a small rumble echoes from the pool of water. Alec quickly stands up and stumbles back a bit. He ends up tripping over a rock. He falls on his butt and braces himself with his hands. But in his fall, he cuts his right palm on a sharp object.

Alec feels his skin become pierced. He looks at his hand and sees a cut that angles from the middle of his palm, where wrist meets hand. All the way up to the bottom of his forefinger. He then sucks some of the blood that is seeping from hand.

Alec then stands back up, clasps his hands together to try and stop the bleeding. He then walks back over to the pool of water where the fin is. He stands next to it, but he does not notice the blood from his hand is dripping into the pool.

A few large drops of blood fall and mix with the water. An expanding cloud of blood disperses in the pool. At that moment, upon the third drop of blood, the rumbling noise is heard again. But only this time it is louder.

The rumble is so loud Alec can feel the earth beneath him vibrate. Alec becomes frightened, he looks around for his satchel of shells. He sees it, he runs over to it, picks it up and tosses it on his shoulder. The satchel becomes stained with blood.

Alec then keeps his hands clasped again. He starts to walk away in a hurry. As he does, the rumbling becomes mightier. The earth beneath Alec starts to shake like an earthquake. Suddenly it becomes too powerful, Alec is knocked off his feet.

He falls on his back into a larger pool of water. He becomes submersed enough that his clothing becomes soaked. He fights to stand up and gets to his feet. As he does, he turns around to look at where the fin is.

But it is gone, vanished from its position. Alec is curious but is grasped in fear as well. The earth is still shaking, but not wild enough for Alec to lose his balance. Then it happens, the earth starts to shake violently beneath Alec's feet.

Alec reacts as quickly as he can, he sees a large stone near him with large barnacles. He stumbles over to it and latches onto the barnacles. He then looks where the fin should be and as he does, the earth opens with an echoing sound of crumbling stone and loud crackling sounds. As if a massive fire is burning.

Alec watches with intensity as his chest builds with fearful anticipation. His green eyes dilate with the moment. Then, from beneath the earth a creature of untold origins sprouts from the ground. The ocean spills into the earth like a waterfall.

Spurts of ocean clash with the beast's body.

Alec becomes terribly scared, he ducks behind the stone and peers from it as carefully as he can. The creature appears to be a serpent of some kind. Its skin appears like that of a shark, toned with hues of grey. Its face, like that of snake. Its eyes as red as a blood moon.

From its face hangs what seem to be loose barbs of some kind. Like whiskers of a cat. They are sharp and tinted in the color of black. Its top teeth over reach its bottom jaw with piercing edges. It barrels into the sky with a howl of deep resonance.

Alec watches as the creatures reaches into the sky. From what Alec can see, its body extends at least three hundred feet from the earth to the sky and it appears more of it may still be beneath the earth. Alec then looks behind him for an escape route. But the fog has faded and there is no chance of him running unseen.

Alec then ducks completely behind the stone. Then, the sky becomes thunderous, but there are no clouds. Rain starts to fall as well. Then, a sudden strike of lightning hits near the creature. Alec darts to lean over to see what happened.

It takes a second for Alec to gain posture of the situation. Then there, near where the fin was, the fin that sticks out from just below the beast's head. Is someone standing, someone that looks of human decent, but is too massive to be of such. Smoke is rising from beneath their feet.

Alec keeps looking, suddenly an object appears in the Beings right hand. It is a large hammer with an acute edge on the other side, like that of a spike. The hammer is far too large for a mortal to handle. The being stands at least nine feet tall. Broad shoulders, scars cover the Beings entire body. Wearing only pants that appear to be made of animal hide. While wearing a golden breast plate covering the chest.

The Beings hair reaches past the shoulders, its dark complexion appears as if it shines like wet marble. The serpent like creature is then distracted from its action and sees the Being standing at its body.

The serpent is successful. Alec is then drawn to his feet. He stands out from the stone, the serpent sees Alec and darts toward him. Alec is frozen in fear; the satchel of shells falls from his shoulder. Some of the shells shatter.

The creature envelopes all Alec can see. Its mouth widens, hot breath wafts from it as it bellows out. Its tongue sloshes with erratic motion. Alec is stricken with a ghostly flesh as the serpent nears him.

But as Alec stands there in fear. The creature suddenly slows down, it drops to the ground and starts to frantically flop around. Shrieking in what must be pain. Alec, unsure of his own situation he comes to. He sees the beast in agony.

Alec does not move, his curiosity over takes his need to run. He watches and waits to see what happens. Suddenly the Being that was swallowed, propels from the gash of the earth. Then, the serpent like creature suddenly splits in half.

Alec is over come with relief as he sees such a beast become nothing but a dead piece of fish. Alec, with no thought leaps into the air and cheers the death of the beast. He then looks for the Being that slaughtered it. But Alec cannot find them.

But as Alec looks around, a thunderous boom echoes from the sky and a strike of lightening flings from the earth and the rain stops. Alec smiles as whatever, or whoever saved him. Alec then gathers up his satchel of shells runs home and tells his mother what happened.

His mother then walks down to the beach with Alec to see the deceased creature. But it is not there, not even the gaping of the earth is present. Alec's mother then tells him to return home and prepare for breakfast.
--
Was is merely imagination or did Alec witness something beyond our physical realm?