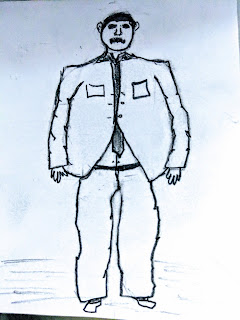 Gorkick, the infamous writer of historical literature, walks down our muddied roads with his embellished belly. He walks as if he were a pig on two legs. His over sized mustache tickles his lower lip. Causing him to constantly wiggle his mouth from irritation. They say he grew it to help hide his hideous smile.

But I say he grows it to feel more like a man. For he is cowardly in his approach to the world before him. Sadly, he is our only hope of change and freedom. But his cowarding approval of himself leaves him wavering to the whim of our iron fist leader.

His eyes sink into his fat face like marbles pressed into fresh clay. They linger about our surroundings as we watch him walk. Investigating our village with little scrutiny as soldiers stand erect with weapons in hand. Following him like watch dogs, panting at the sight of our impoverished presence.

I follow carefully from a short distance. Keeping my presence hidden from the soldiers. Watching him, I can see the village leader's eyes look upon him with desperation, but he remains silent. As any word of our ghastly situation, the beatings, the starvation, the forced labor.

Would only lead to his death and quickly upon the extraction of Gorkick he would surely be hung. Not only would the soldiers hang our leader, they would most likely hang two others beside him. A sick twisted visage of the holy.

These soldiers shy from no torment, they revel in the ability to strike fear into our feeble existence. They salivate as they conjure up thoughts of death, torture and meaningless accusations to bring us to our knees. To make us feel less human. To create us to feel no more like an insect, an ant, ready to line up and follow orders with no resistance.

Our village used to flourish but, upon the war we became occupied by our own country, stolen of our rights, if we even had any. And driven to labor and sickness. We are but pawns for our countries "righteous" making.

They tell us, "You are the bones of this country and if you fail, then we will lose our country at the hands of our enemy."

How awful, how deceitful, how malevolent can one be? Speaking to us as if we are naive and gladly plague us with lies and suffering. We bear no defense, for we were taken of our weapons long before the war ever began. And so with no effort at all, our country sweeps in and plunges its crooked head into our lands.

Its mouth wide open for us to be devoured, its teeth chomping away at our freedom, at our very breath. It has been three years and I have watched our village be cut in half. Either by illness or by the hands of the soldiers, "all in the name of the country."

And from the porous and paranoid tongue of soldiers and our countries fearless leader they say,

"You are the magnificence of what makes this country. If a few bones must be broken to build an empire to last through the generations so be it. Sacrifice is crucial if we are to come together and create a bosom for our children, our children's children, and their children's children. To live in what we could only have dreamed of. Let your lungs fill with the country air, let your muscles fatigue and your guts grow hungry. For all those are signs of a great worker, a patriotic lover and a believer of the country."

It no longer astounds me the words these devils speak. For they only care of themselves, and for the vile movement they created. It is like they are built with silver tongues of lies. But am I too brash with such thoughts?

Maybe some are just too fearful likes us, hanging on by a thread, fearing each breath we take as any mistake could be our last. And here stands Gorgkick. The fat slob, the selfish waddling imbecile, our only hope for change. For true freedom.

But dare he truly open his eyes. Does he not see our ribs? Our meager legs trembling as we fight to remain standing? Does he not see the children shivering as they place compelled smiles upon their lips? Does he not hear the sounds of sickness echo from every man and women he passes?

What ignorance, or blind will does he follow? He has no reason to rush into truth. His belly is full of cheeses, wines, and bread. He is fulfilled in the physical. Sadly he lacks the mental capacity to be truthful, to be a man.

I can see him unwilling to look even a single soldier in the eye. He merely passes them by and nods. Watching him makes me sick, more sick than I already am. How does any person walk through such sights, such noises, such smells and does not grow the balls to speak up?

I know the stench of rotting bodies is not his pallet, it is not ours either. I can see him holding back his disgust as if someone had placed molded chicken at his table. Gorgkick in his white tailored suit, he approaches the end of our village.

He turns around, two soldiers on either side of him grasping their rifles with eyes eager for someone to disobey. And he says,

My stomach churns as I listened to his words. His large mustache hanging like loose broom bristles. A few hang longer than the others. With each breath he speaks, they wiggle against his cavernous throat. He adjusts his suit, he's turns away from the village and makes way to the ship he arrived on.

I continue to follow him, in my resentful state, my oddly jealous hate for the man. I swell up with the thought in hopes he will be shot. Even I have become a man of wretched thoughts, could I as well be like the soldiers? No, I am merely expressing what any one would think, what one would think in such heat of emotion. And what one thinks and does are two different things.

Watching him and the soldiers walk away I see them suddenly stop. Gorgkick, the weak man he is. His stomach, or maybe even his eyes, could not handle what he just had to seen. He vomits, the soldiers watch and laugh at him.

They call him names and playfully prod him with the muzzles of their rifles. Gorgkick does nothing to retaliate. He just stands back up, catches his breath removing his handkerchief and wipes the vomit from his mouth.

I smile as I watch. Seeing him vomit at least tells me he has some humanity left in him. Maybe being here for the short time will haunt him. Forcing him to write what he should have written long ago. But his weak mind has ignored the "rumors," of our suffering.

And now, he has seen it with his own eyes. But sadly that does not become the case. I watch as they make way back to the ship and no more than two minutes later I hear a gunshot and a body tossed overboard.

I clearly see that it is Gorgkick, you can't miss his portly shape and white suit. Three weeks later, a short article comes out. "Written" by Gorgkick, stating how wonderful the visit was and how happy and healthy the children are.

Buried, till we are like a faded breath to a cold morning.
---
I write this in memory of those who suffered the tortures of tyrannical leaders of the worlds history. May we never have to suffer such fates ourselves.

Be relentless in the pursuit of the heart,  A Man;s Traveled Heart
Coming soon, The Bleeding of Words