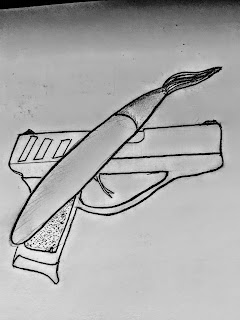 Mia was an "outcast,"  an individual of different ideas and perception of life. She wore clothes that never accentuated her figure. Most were dark, baggy, and plain. She never took time to draw attention to herself. Yet attention would find her, laughter from the snarky jocks would round themselves about her.

Prodding fun of her looks, her choice of clothing and how she spoke. She spoke shyly, stuttering with unprecedented anxiety. Her eyes would dart wildly as tears would silently fall during the pressures of unwanted attention.

Their laughter would echo throughout the day in her head. Over and over she would replay the horrible moments between her and the rude abilities of bullies. Every morning she would do her best to dart to her classroom.

Scrunching herself into the smallest shape possible while hugging her books tightly. But not matter how small she made herself, no matter how dark of clothes she wore, even in the the darkest of mornings.

They would find her, approach her like hyenas. Laughing as they approached her, pointing at her as if she was a zoo animal. Some days, if they felt the urge, she would become their pinball. Pushing and shoving her, bouncing her off walls and off each other.

Tossing her about as if she was plagued with disease. Every year was hell for her. The mental beatings of her classmates eventually wore her down. Arriving at home each day, she would find herself facing the mirror in the bathroom. Door locked and music playing loudly.

She would look at herself, disgusted and appalled by her weakness, by her looks and her clothes. But she never told her parents nor her friends of her ugly thoughts or the trouble at school. She kept it to herself, she didn't want to be a snitch nor be seen as weak.

So as the years went by she slowly broke herself down. Finding every little bit of her that she could scorn, criticize and bring into the empty ballistics of her heart till they were full of nothing but contempt. Her neurotic tendencies drew her to become reclusive in her coming years after school.

She dated men that found her as nothing more than a of passing time. She found love in those that found her boring, drab, even to the eye. This only led her to be more repulsed by her existence. But something strange happened one day.

After a tragic death of one her friends, her only real friend. She saw something in the tragedy, she saw life from death. She always adored her friend, looked up to her and felt she could confide in her. The day her friend died, was they day Mia was going to tell her about her pain, her impending struggle with herself.

But it was too late, her friend was killed in a car accident by her boyfriends erratic driving. After a month or so went by, Mia felt something hit her. It was like someone flipped a switch in her. She looked herself in the mirror at that moment. And for the first time in ten years, she looked to herself and smiled.

What she was smiling for she was unsure in the moment. But she held on to it dearly, for as long as she could. Feeling this, she ran to her dresser, peeled off her dark clothes and dressed herself in jeans and slim white T.

She then went back to the mirror, removed her dark mascara and lipstick. She put her hair in a bun and smiled. She felt...alive. She felt worth something, why, Mia may never know? But in the tragedy of her friend she found something beyond what she had ever felt.

All the darkness, all the anguish was swept away in a moment's notice. Mia, smiling in the mirror and twisting herself as if in a fashion show, desired herself for once. Death was at her throat she thought, just as death was at her friends.

No death is without sorrow, without grief, and Mia had yet to let her friend go. But she did not want to become the victim of her own undoing. All the anguish of her past, was her past, she was not that. She was not the frail pathetic student that clung to the shadows.

She was a girl waiting to be brought to her potential and so she did. She brought herself from the ground up. She pulled her heart from the grimy mud, washed it off and placed it back in her chest. That day, that day she smiled, she wrote down everything she desired and wanted in life.

She was always drawn to painting, throughout her days in school to calm the suffering in herself and the passing of her friend she would paint. She would paint obscure paintings that expressed the sorrow she held inside. She painted of death, of darkness, but also painted of life, often mixing the two.

Creating a collage of good and evil. So, she decided to pick it up, she decided to go to art school. She applied and was quickly accepted. She was never the best student in life, but she sent in a few paintings of hers and the dean of art took to them.

A few years fly by, she has an art degree now, created many connections into the world and took it upon herself to make her own world. She started a gallery of her art online. She went out day and night handing out cards of her website.

She set a goal to keep herself occupied by only that which she was passionate about. Every morning, instead of slouching in the cold mist of dreary mind. She rose with intent to smile and place her heart at the forefront of her mind.

Another few years goes by, and she gets her first acceptance to a major art gallery in New York. She displays her work at a well known art collectors gallery who was extremely enthralled by her designed.

They explained her art as, "Human."

They gave her an opportunity to travel the world with them and put her works on display. She accepted and after a year, she raised enough money to create her own art gallery back home. She set up shop and had local and renowned artists display their work.

But life is not always fortunate for us, not even those that live with well intentions and achieve their dreams.

Six months after the grand opening of  her gallery on a trip to meet an artist in New York, Mia was mugged and shot. She died that night, her family never had a chance to say goodbye. But her gallery remains with the family and her sister has taken up her position.

A few weeks after her death, her mom found several diaries of Mia's. Detailed accounts of her times in school, her friends death and her journey back to life. Her mother, heartbroken thought they were so close.

For weeks her mother could not stop crying. Then, one day, Mia's sister read through each diary and in the last one, on the last page it read,

"Everything that has happened to me, has a reason, good or bad. My unwelcome time in school was part of that. It taught me much about myself and what I needed not to become. My mother was always there for me and still is. I love her and my family so much, if only they knew but I am terrible at the idea of affection, gifts, and paintings are much easier way to show my love. I hope, what ever happens to me, my mother, my family knows I love them even to the end. Hopefully, my journey, my work will not only impact my growth but many others. I only pray that my family finds peace in themselves as I have."
--
Tragedies can either be a reason to fall or reason to rise.
Our past is never our future unless we make it to be.

Be bold in your journey and unwavering to your enemy,  A Man's Traveled Heart