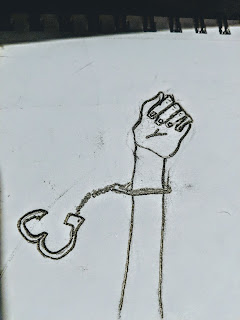 The audience has spoke and they are outraged. They have grown irate of the noxious lies. The endless attempts to run them dry, playing the audience as if fools. To bury them to the catacombs of fees, just to appease the actors. The famous seats of the world.

And now, the audience stands, booing with great indignation. Baring anger in hand, "Tear down the stage. Our lives mean nothing to them. They have taken us for jesters, for pockets to line theirs."

"They have taken from us our freedom to be. Slowly suffocating us with their entertainment to dull our senses. Keeping us in the dark as if the sun is no more."

The audience gathers in arms as the actors stare as if appalled. Blinded they say, for they wish only the audience pleasure.

The actors look on as if bewildered by the raging crowd. They pull up their shirts, hide their faces as if to block fumes of smoke. A sudden burst is herd, a cannon launches from the stage. The audience is hit, the audience screams. The horrors of injury cry out into the smokey haze.

"It was not I." Yells the actor as he hides the match behind his back. His finger pointed to another stage. "It be them, it is them that brought us to this. I was but a pawn, a figure to be plucked and placed"

The crowd pulling up the wounded, arms covering their mouths. They point, their eyes glare with much disappointment, no, with malice toward their actors, their realtors of recreation. "You have damned us to poverty of enjoyment. You have spent our fees with no adjustment to us. With no change, no constructive empowerment. You have given no hopeful chance for the young to see truth, for the young to bare witness to profound words"

The actors stand, their arms crossed, their faces baring false witness. Their lips curving to lies so gracefully they do not hear themselves. For so long they have played behind masks, entertaining the masses. They remember little of the beginning. Little of struggle that have brought them these elegant stages.

The relentless barrage of masquerades upon the ever so loyal audience has brought nothing but suffering. And now the audience can bear no more. They raise up arms and take to the stage, they climb the curtains, the scaffolding, the beams that support.

They grasp to the echoes of what they have lost by their own hands. Given up so much in faith of their actors. Their leaders of entertainment. How honest they thought they be, baring only voices of veracity.

But the people were taken so naively, so trusting that they gave it all to them. And here they be now, a revolt against a system of lies. Against actors that have bled them of their funds in reach of their own wealth.

The people no rip themselves from the grip of fallacy, plunging the stand built on a false foundation. The theater crumbles at their hands. The actors now stand bare, nude to truth. Yet, they do no quiver, they hold to a confidence of security.

And from the the shadows, from the rubble of the theater comes the beasts. The animals released from their cages for this very day. Their teeth sinking to the flesh of the people, their claws lacerated their tongues.

The audience holds no weapons of their own but the tears and screams of horror. The need for freedom bleeds from their hearts as the corrupt stand nude, gripping their throats with pleasure. Tasting the dripping tears of the audience.

But the crowd is too much, the people are too many, the audience is too loud. The animals are but pawns so they are of no direction. Though they have ravaged the people, slain much of the audience, and split the crowd.

The animals are welcomed, they are given passage by the people, by the audience, by the crowd. And so the animals kneel, turning away from the actors, and now, the actors quiver. They shake to the naked truth.

What lies have been told to you, what corners have you been pressed to that you've had to fight back?

We are all our own, but without others we know nothing of ourselves,  A Man's Traveled Heart