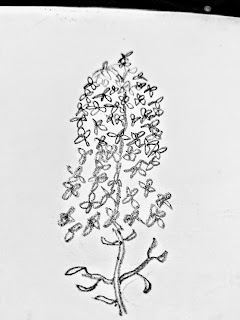 The garden wraps around the home with a captive appearance. It's intrinsically designed pattern gives the home a sense of comfort, swaddled in a maze of French Lilac. As green hedges form accompanying the Lilac, coupled by a pattern of evenly spaced feathery Cabbage Rose's. Their delicate and pronounced appearance give such an alluring feel.

Among the maze of French Lilac's sits calculated in presentation, other wondrous flowers and plants. Small and carefully attended to, are planters giving birth to the natural beauty of nature. This garden is everything and nothing all at the same time.

It holds no real meaning but to grasp the attention of curious eyes. The deeper you travel into the maze the more wonders your senses take in. You find things you have never seen before. You find flowers hidden beneath the trooping of sunflowers as they try their best to be the attention of all.

Their longs necks preceding the distance of all others. They tower high, bearing over others that wish so eagerly to be adored by a passing nose. Their brightly lit faces smiling, but smug as they will not last the cold. But even they are not always the rage of a curious audience.

Daffodils and Dahlia's are many times the abductor of the eyes. Daffodils hold such a beautiful presentation. Their yellow hue gives a warm glow in an evening sun. While the Dahlia's captivate viewers with their crimson petals and their uncanny ability to bloom in the form a sphere.

And so the human mind wishes to hold them as such, a ball, a sphere, a delicate frail piece of nature. Screaming to be the company of a gentle and warm grasp. Only to be sought after for a second, as an audience nose seeks an aroma. But none is to be found, though Dahlia's present elegance in features. Bewildered, the Dahlia is quickly learned to be of only aesthetics.

Which many plants and flowers you view here are set for only such, giving the mind reason to be seduced. Dazzling those that are graced with the chance to venture into the maze of man made nature. Distracting those who pass by only in search of a road or friend.

But as you penetrate the vastness of the garden with your eyes, a complication dawns within the mind. That is, if you are thinking man, a thinking woman. A complication of reasoning behind all this. For the home gives no shelter to any living being.

But the garden is tented too and it is welcomed to those that ask. As many have cherished its beauty, it wonder. Some complicate their viewership of such a place with deep thought. They are caught in the gardens artistry.

But the deeper they fall into its cornered walls, twists and turns many become angered, but on their freedom; their exit. They are overcome with relief but few find something greater in their relief beside freedom. Some find peace in their head and beauty at their eyes. There is much to this garden, but often it is meaningless but, sometimes everything.

It is up the beholder, the viewer, in what they will find for themselves in the losing of their way in the French Lilac Garden.
--
Please, let me know what meaning you get from this story.

Cherish the heart, the eyes, the ears, the nose, the tongue, for someday, they will all be gone.
A Man's Traveled Heart
Coming soon, The Bleeding of Words.