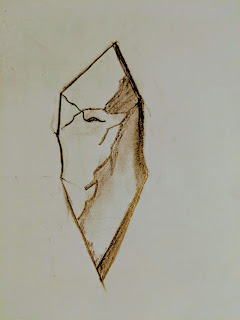 
There were no more schools of magic. No more rules, no more laws. The wicked have taken over and the good have been driven to shadow realms. Schools of magic are now the harboring homes of the wicked.

Where spells that were once locked away forever, have now been broken free. An abundance of black market spells are now sold daily on the streets. Passed from one witch to the other. From one evil wizard to the next.

Mages and magical creatures of all types, evil that is, now walk with power. With frightful anger and revenge. The world is now a breeding ground for the evil. Ghosts, beasts, and vile creatures of magic walk the streets openly.

Murder is no longer a foul act of the law, but a mere act of greed. Each wicked heart taken by another, purely for more magic. For more strength to be the ruler of the dark skies. It is forever winters kiss as long as earth is held in the grasp of evil.

No flames burst from these wicked souls, for they breed off sadness and fear. They loathe the heat and bring no such hope for it. They seek only those of frozen souls, those in the lips of melancholy that cry out in the night with shrieking tears.

They feast on the feeble like the devil feasts on lies. Savoring every morsel as if fine dining. Buildings now curve and twist like vines. Souls of the damned spew from the sewers like steam. You can hear their screams with every passing minute.

There is no day where suffering is at peace. The cold city streets leave no mortal without pain, without suffering. If by chance a mortal is found, which not many exist, small fraction have found sanctuary. Finding shelter in small hidden buildings.

Hidden by magic within the city. If found, they are quickly swept up by wicked hands. Most mortals find themselves face to face with the Sorrowed Soul-Reapers. They have no heart, they are merely vessels of dark smoke. They are in constant hunger to eat, their constant miserable existence has driven them mad.

Their hunger is driven by the hope that if enough souls are consumed, they will be granted a heart of one of their victims. They long to feel the beat of a heart, some believe these malice creatures are lost souls that never found death.

They are the outcasts of evil itself. They are rarely found in the depth of the city. They prefer the dark corners and allies. Where the closest sound of silence can be found.

The world is cornered by darkness, by the hands of evil. The good, the little that exists, is stuck in a realm. A realm built by the final spell of Elpis, the most powerful Mage there was. But evil overran the good.

Evil found ways to blend among the world during their coupe. They started at schools, slowly changing thought with each passing year. Till they finally enveloped the lessons of good and shrouded them in darkness.

Creating lies, building fiction out of truth. By the time the world saw, it was too late. The powers at the top, the Magics of Earth, the leaders of it were just as corrupt as those at the bottom. Slowly they feasted on the bowels of goodness.

Soon, the world became a shamble of lost eyes. Willful blindness became the excuse of many. Now, the good, the handful that remain. Must find a way to escape the realm. For in the death of Elpis, the realm is canted to stay shut.

Till either, evil devours itself, or they find the shard of Ares. The last hope to bring evil to its knees is at the magic of a stone. A stone built by the most powerful wielders of magic through the ages. But upon it's completion, it was sent to a distant realm. A realm lost to all magic. It was tossed from magic due to the greed of those that felt inferior to those that held such magic prowess.

They saw such a stone as chance to turn the tide. And so it was cast from the world in an act of forever. But now it must be found, for the time it will take death to devour itself. The realm where the good lay, they will run out of resources to survive. They must fight, they must take back the earth.

Catch your heart leaping in, A Man's Traveled Heart
Coming soon, The Bleeding of Words.

Thank you for your continued support!