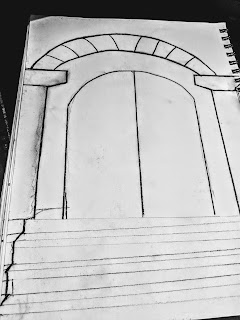 The sun sets high, it's midday and the kingdom of Erlise is under attack by Herald. Herald is the neighboring king. A king of greed and power, his magic surpasses most. They say he sold his soul to the devil for the power he wields.

His magic is dark, it is fueled by anger and the souls of the damned. His eyes as red as the blood that pumps beneath flesh. He wears a cloak of black, draped over armor built by the hands of demons. His sword, designed in constriction to grow in height.

He wields such a blade with ferocity and rage. As the sun sits high Herald walks the towering steps to the entrance of Erlise. The guards, mere mortals, some bear magic, magic that is cast by word. But most mortals cannot reach beyond the ability to cast a fireball.

They wear armor of silver coated in spells to resist magic. But as they rush to strike down Herald from where he stands. Their armor is capable of no resistance. He slaughters them where they stand with a mere flick of his finger.

Slicing them in half, some from their waste and others, he dices them as if bread. Each step he takes screams of agony from the dying guards that spill into the echoing courtyard of the castle. Herald is closer with each second. Soon, he will be at the entrance, separated only by the kingdom door itself.

A door bound by powerful magic of an angel. Herald is at the last few steps to the door of Erlise. He bares a grin of greed and power. His armor spattered in the blood of the guards. He licks the armor of his hand and savors his malice victory over the guards with taste of their blood.

He now stands at the door. His dark hair rests upon the shoulders of his armor. He tilts his chin to his chest and raises his eyes to the door. Upon the door is the carving of angel wings, baring from the back of a women.

Herald laughs, his hair falls to the side of his face. What little white resides within his eyes are seen in the shadows us his hair. He then raises his chin and yells,

"King Thayrill,I have come for your kingdom. I have already slaughtered your guards in pleasure. Now open this door or feel the wrath of my power!"

Herald grows silent, waiting for a reply, but none is heard. Herald's dark heart beats heavy. With no reply from king Thayrill, Herald clenches his fists, bites his own lip till it bleeds and screams into the air.

A sudden aura of red flames burst from his armor. His eyes turn to black and his face that bears no armor shifts to that of a demon. Sharp teeth, a mouth of unsavory breath, and a tongue of lustful needs forms upon his now unholy face.

Herald, if he still be Herald, presses out his arms in a quick fashion. His palms only a few inches from the door, a powerful presence is forced from his body and presses against the door. At first, there is no nudge, no give from the entrance.

Herald then grows in strength and forces more power upon the door. The door can hold no more. The wings carved upon the door begin to crack. Then, where the door splits down the middle upon the back of the woman, the door begins to rip. Separating itself like paper torn at the hands of anger.

The entrance now lays crumbled. Herald laughs as his powers subside to a low aura of red flames. His eyes and face still remain demonic.

He steps upon the rubble of the entrance and calls out to king Thayrill.

"Thayrill, you coward, face your enemy or be slain like the fool you are!"

The sun now rests to rear of the castle. Shadows cover the front courtyard in an ominous tone. Herald is now inside the castle. His heavy steps echo through the castle hall. He looks around, dust from the destruction of the door still brings a haze before him.

He takes a few more demanding steps inward. The dust settles, and as it does a figure stands before him. A silhouette of a small delicate being. For a moment, Herald cannot see who stands before him. But he remains silent as he drags his tongue across his lips with lust.

Then, the sun that is making its way to the opposite end of the castle, breaks through a large window that stands behind the unrecognized Being. The sun floods into the castle hall. The once hidden figure is now covered in a kiss of the sun.

Herald sees it is only a woman that stands before him. He grins with pleasure and says,

"Has the king sent you to satisfy my body so that he may flee or hope that I become enthralled in such beautiful morsel of the flesh and leave this all behind me?" Herald presses out his chest and his eyes lock to the woman's body.

The woman, silent, looks to Herald and replies, "This is your only warning Herald, you have entered forcefully into the kingdom of Erlise and that is punished with death." Her blues eyes pierce into.

The woman wears a dress of silver and hair of gold. She looks no stronger than a calf from its moment of birth.

Herald laughs hysterically and says, "King Thayrill, is so weak he dare send a woman to do his job?"
Herald grabs at his groin and smiles.

The woman then starts to approach Thayrill and begins to speak.

"King Thayrill is no coward, he merely wishes not to throw his life away, for unlike you, he is bound to no devil and wishes only good for his people."

Herald smiles and replies, "Good for his people? If that be so, why allow me the slaughter of his guards?"

The woman still approaching, " For that is the sacrifice they have given themselves to. They willing signed their lives to protect our kingdom even to death in a futile fight. Now step out Herald or be a new head to decorate the Throne room." The woman then starts to run at Herald.

Herald, seeing the woman rushing to him, he changes his stance. He prepares himself to fight. "So be it woman, death you shall have and all who stand in my way."

Suddenly, as the woman nears Herald, a halo appears above the head of the woman, wings of an angel sprout from her back and she glows with holy rays. Herald's eyes grow in surprise, his heart suddenly becomes a racing pit of anxiety.

"I thought angels were no more, I thought they had abandoned the human race!" Herald prepares to attack.

The angel lifts from the ground and charges Herald, "You have been sorely mistaken, for we have never abandoned the human race. They had merely forsaken us, they were blind in the endeavors of the flesh. But now the world is waning toward our revival."

Herald has no time to attack, he tries, but the angel vanishes into the air. Herald is spooked, his demonic face shakes and he now bears his old face. His eyes red but with fear, his heart quivering like a loose grip upon a bow and his red flames are no more.

He looks around in panic and as he does, he feels a warm sensation emanate from his chest, he looks down. And there, where his heart beats, bloods seeps from his chest, spewing out from his armor. He looks to it with fearful confusion, he places his hands over it.

But it is too late, his heart is pierced and his armor has become useless. His armor shrivels and turns to dust. Herald collapses upon his knees and falls to his face. The kingdom hall becomes silent except the echo of Heralds body.

It echoes off the hall chambers, bouncing off the large pillars of ivory that span from the entrance to the other end of the hall. The angel suddenly appears from behind Heralds body. In her hand is a sword made of a white light. It glows with a warm feel. She whips it and flings the blood of Herald from it. She then places it into her sheath and vanishes once again into the air.
---
Do you believe in angels, if so what are angels to you?
Do think there is a battle behind the physical one we see?

Find more of my words at the grasp of your hands, A Man's Traveled Heart
Coming soon, The Bleeding of Words