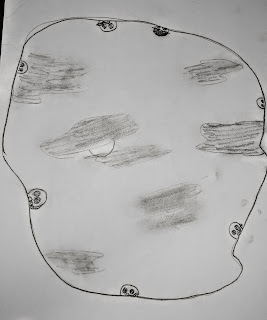 It was our last meal, I remember it well. It was the meal before everything changed. It was the meal  that tasted so sweet yet so bitter. I remember what it was to this day. It was rice, beans, and a packet of salt. We were given water that had run stale from sitting in horse troughs.

The air was cold that day, the fog was dense. The clouds were low and hovered with authority.  They were of a darkly color, as dark as rising smoke from burning tires. I remember Looking up at them as I ate my food in a huddled crowd of others, I remember they gave me an ominous feel.

But they also gave me comfort. Like a wet coat in the rain, it may not completely protect you from the rain, but it is better than not having it. As I was eating my food, I remember feeling an elderly man, probably fifty years older than me shivering wildly.

His eyes were dark, circled in depression and misery. His skin wrinkled like an old rag. His breath was shallow. His hands shaking as one held his plate and the other attempted to feed himself. Most his food fell from his spoon.

I kept eating as he struggled, I did not know what to do. I was too young to even understand what was really going on. We were all in a massive ditch, shoulder to shoulder. Some us were on our backs. Laying helpless in the mud.

Then, as I was taking my last few bites, someone next to the elderly man put down his food and tried to help feed the old man. But just as he was raising the old man's spoon to his mouth, he died. Just like that. It was as if he gave up  on life in that exact moment.

There was no coughing, no fighting, no struggle to keep going. No sign that the old man wished for better. At this point, I had seen many people die before me. Yet, I did not understand why, sickness is what they told me. But many of those that died, they appeared fine just before they suffered in death.

I watched the old man fall like a bag of rocks. He collapsed and fell into the mud. And like a bowling ball thrust down the alley, the old mans body knocked over a few standing men like pins. They lost their food and those that did, their eyes did not flinch. With the amount of suffering we had been through, losing your food was minuscule at this point.

Some times we would go weeks with no more than water and a slice of bread. We were sacks of bones somehow still stumbling around on our feet. At the time, I did not understand what was about to happen to us.

I just held onto my food as best I could and finished it all. Usually the adults shared with us children, but none of them did this time. Now, I understand why. It started to rain at one point I remember. Not heavy, just a constant drizzle. Enough to cause the mud at our feet to become a shallow body of water.

Those that were already dead, quickly became buoys to the flooding ditch. I finished my meal, most did or could not; their stomachs just could not bear any food. When I finished, ten men surrounded us from the top of the ditch. They wore masks that covered their entire faces.

Their eyes were glass and a strange aperture hung from their mouth. They wore thick long dark jackets. All of them wore these strange metal backpacks and were holding on to an elongated tubing with a thick rounded head. Much like the muzzle of a rifle, but only larger.

I just stood there looking up at them. watching as they would vanish between the frantic adults. This was the only time I had ever heard so many people cry and scream at one time. I had heard screams before, from behind doors.

But nothing like this, a mass gathering of petrified souls. We all knew each other, so many embraced with tears. I had been separated from my parents months ago. So, as this was happening, Arthur Schell picked me up, he was my bunk-mate during my stay in that living hell.

As the frenzy of frothing screams and tears echoed into the cold night, I remember looking up at Arthur and he looked down at me and said, "May we be blessed one last time by the hands of Adoni."

Just as those words fell from his mouth and touched the air; God heard them. The siren to the camp rang out, a man from above the ditch yelled at those surrounding us and he commanded them to leave. But as he did, one man ignored the call.

A burst of steady flame came rushing down upon us. A breath of a dragon scorched a fair amount of us. I could feel the heat prickling my skin as it burned those around me. Burning flesh quickly annexed the air and bloody screams of agony took to the heavens.

But just as the man was making his way to our side, someone came up behind him and shot him in the head. A few large explosions sounded off in the air. At least a kilometer from us. Then more sounded out. They got closer and closer.

Gunfire started to sound off on the eastern side of the camp. The man that had just been shot slumped over into the ditch with us. He fell on top of few screaming men as they burned alive, they were so frail you could hear their bones snap as they were crushed. Two of the three men drowned in the shallow waters before the flames could take them.

While the other one was saved by a handful of those that had enough strength to pull him out. Too this day, I don't know who killed that man. But who ever did, saved many of our lives. At least a hundred to two-hundred out of the six hundred of us that were in the ditch.

Most had either died from the flames, sickness, or starvation.

There were two thousand of us a few months prior. But I remember we were suddenly vanishing faster than usual. It was normal to see people disappear after awhile. There was nothing we could do. But as the gunfire grew and the explosion rang out.

I remember Arthur smiling, jumping up and down, as best he could as he cheered into the air. He was looking up and I looked up as well. When I did, a dozen planes flew over. Some had American flags, others had English and Italian flags.

"We have been saved." said Arthur as he started pushing his way through the crowd of  corpses and dying men.

Twenty years later, Arthur died of cancer and I became a student at Harvard.
---
This is just my thoughts on what it may have been like to be child in the holocaust.
What have you been taught about the history of the holocaust?