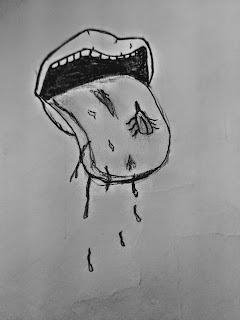 Everything fell apart, everything. It all became a shamble of horrors, of mental disparity. Ghosts now cling to the walls, to the pictures, to the dusty cabinets that bare no food. No voices have spoken a single word within these walls in months.

Everything is gone, crumbled, vanished in an instant. Oliver is no longer whimsical in his thoughts, his heart, now a black hole. A cosmos of black space, a cold chamber of hate. He is now a friend among the cobwebs and spiders. He curls to the corners of his dark home and whispers as the infestation of madness infests.

His mind curtails any thoughts of joy. His bones poke from his flesh like fingers pressed to dough. He is mental in his own. A soul reaping of rotted stench and ugly woes. His mouth is foul with pity as he crawls on his hands and knees.

Mumbling nonsense beneath his breath. His teeth clattering to the frozen as winter proceeds to give him no warmth. He cries out, but there is no one to listen. No one to hear his pathetic cries as he chews on old pieces of dried meat.

His eyes, as distant as the dark side of the moon. He speaks to himself in worries, in fears, and uncertainties. Contemplating death, dangers, and wounds. Frail he is, but acting as if sound mind be his sophistication.

But what sophistication does he wield? He his a man without a frame, without foundation as he calls out with a whimpering tongue. He has made friends with insects, with arachnoides, or so he thinks. As they scurry about his filthy floors.

He places his face to the ground, his eyes looking to the now close horizon. Admiring with a loony smile, the intricacies of six legged companions. His eyes darting with lunasies of intrigue. His frail body trembling with each motion.

His face sunken with malnourishment and his heart palpitating in pain. Looking, he sees a new friend, and unusual specimen. And in his maddened state, his quivering hand darts out, snagging up the bug.

Struggling, Oliver sits up and examines the insect. His eyes wide as he pinches it carefully between his finger. He brings it to his nose smelling it and then reveals his tongue licks its underbelly.

At first, he seems repulsed by the flavor, but he is then overcome with hunger. He tries to refrain from such an urge. "This thing is not food, but a friend, a six legged acquaintance in search of shelter, in search of a friend like I." Thinks Oliver as his tongue hangs from his mouth.

He feels the urge to devour this new thing, this new friend of his. His belly grumbles, aching for sustenance. Oliver pleads with himself not to do it. His hand shaking and the insect, fighting to be free, to scurry away.

Oliver releases a tear from his face and jams the insect into his mouth. He crunches down, he feels the insect burst in his mouth. Its guts ooze like a thick paste. Oliver begins to weep wildly, he curls up into the fetal position on his side.

Rocking back in forth as has chews upon his now deceased friend. In all his madness he cries out in apology, "I am sorry my friend, I am sorry, but I cannot starve, I must eat, I must be well."

His teeth covered in bits of severed bug. His now sobbing mouth spills with saliva. He weeps with such remorse, such madness. Upon tasting, upon feasting, devouring his new found companion. His stomach quiets.

A moment of comfort finds Oliver, he grows silent in his tears and listens for his rumbling gut. But it does not speak. He presses his frail body from the ground and looks around in a state of mania. He sees bountiful insects crawling about.

He sees bugs, and spiders he has named and conversed with over the years. But his stomach is silent and he thinks, "Maybe that is the reason for my friends, maybe, they are to be sacrificed for my aching belly?"

Sitting, he tries to dust off his grimmy shirt, he spits on his hands and brushes them through his hair. Dragging his body he makes his way to the cabinets near him. He opens one of the doors and in it is an old dirty rag. Oliver grabs it and shoves an end into the collar of his shirt, just under his neck.

He turn slowly back to the opening of the room and says, "Tonight, I feast."

Oliver's mouth starts to water, his belly begins to grumble and without any further thought. Oliver plunges out onto the floor plucking each and every insect and spider he can. Devouring each without disgust until he can no longer eat.
--
Stranded, alone in the head, left to the misery of thought, how low can we bring ourselves?

Find what it is that draws your pain to motivation,  A Man's Traveled Heart
Coming soon, The Bleeding of Words