From the Rift Came the Witches 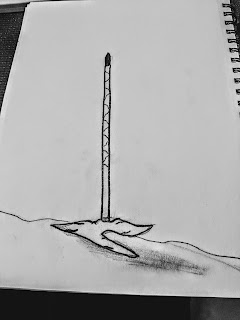 From the Rift Came the Witches


The rift opens, expanding from another universe. The witches of Malgnant pour from the rift. Ripping through it like dolphins breaching water. Residual fluids from the rift drip from the witches bodies like saliva. Its black contents fall to the ground.

Creating smoke to rise as the droplets burn whatever they touch. The witches, flooding from the rift snarl and laugh maniacally as they circle me. Singing old witch song and taunting me with their presence.

I can feel my skin crawl as they come from the rift like swarms of insects. I stand almost defenseless now, for I lost my staff. Without it, I have no ability keep casting spells. Surrounded, I do my best to ward them off with what little magic I have stored away in my body.

But as the witches multiply I am quickly running out of power. I can't keep casting spells without my weapon. It holds a majority of my magic. My body can only carry so much. As I feverishly keep the witches at bay, I scan the forest floor for my staff.

It was knocked from my grasp by one of the more powerful witches. But I was able to kill her just as she did stripped it from my hands. I had been able to strike her down with a caliber blast. But in doing so, her death called all the witches here.

Now I am surrounded by a horde of witches. Not exactly how I want to spend my day.

As they continue to circle me like a murder of crows, they begin to cast a spell. Their lips conjure a witch language I have never heard of. Suddenly the sky turns black, no clouds, just a sheet of black. A rumbling of thunder roars as the sky becomes a shadow.

Though the world around me is changing in frightening ways. I keep firing Firefly Bursts, but I feel myself running out of energy. The witches are slowly circling closer. Fending them off, I continue to look for my staff. Then, as I hit one of the witches with my blasts they fall.

Crashing into a pile of branches and bushes. As she hits the ground, I see my staff peering from where she lays. Its brass tip gleams for a moment from one of my blasts. I then summon up what  power I can.

I close my eyes to concentrate, I can feel their darkness closing in as I summon up my power. As I do, the weather becomes cold. A frigid air nips at my skin, my body begins to slow. I feel as if I am being turned to stone.

Summoning my powers, I feel my legs become stiff, but I must remain focused. I can feel the hair on my head become as frozen as ice. The witches continue casting their spell. Their lips smack with wicked purpose.

I hear trees falling as their roots become too frozen to bear any hold to earth. I now feel my hips become frozen. A cold feel starts to shiver up my body. My face begins to numb. But focused I must remain.

The witches close in even closer. I can feel their presence circle me like a wild wind. Suddenly a witch flies straight into the sky and sends herself straight down the middle of the witches circle where I stand.

I conjure up enough power to fend off the witches, but only for a moment. I can hear the witch above me laughing as she darts down toward me. I open my eyes, look up, her face quickly turns with fear. She sees the color of my eyes, they are white. Glowing like two stars falling from heaven.

I then say the final words of my spell. A heavy wave explodes from my body, the witches are forced from their circle. I then fall to one knee as the power I expended is the last of what I have in my body.

I then do my best to make it over to my staff. I struggle for a bit but make it. The witches are struggling to gain composure as well. The sky is still black, the coldness that was consuming my body has been lifted.

I reach my staff, as I do the witch I thought I slain into death that fell near my staff grabs hold of my wrist. But I am without hesitation, I pull away quickly, I then spin my staff so the brass tip is pointing toward the witch. I then plunge my staff into her chest.

It pierces without any resistance. Black blood seeps from the witches mouth. Her head hangs down like a loose trophy on a wall. I fling the blood from my staff and turn to the remaining witches.

Then a strong frigid wind blows through. I have a sudden feel to look up to the sky. And there in the darkness are a witches eyes. They Look down upon me like two independent planets. Then, from the darkness comes a grinning smile. Teeth covered in stains of yellow and black appear.

Then, a complete face of a witch forms. It says nothing to me, I then send out another caliber blast. It hits directly between the witches eyes. The face shakes madly as she is hit. Then, a witches hand comes flying down from the sky.

It attempts to reach me, I move just in time. I send another blast, another and another. But the witch won't die. Minutes go by, as we fight, I look around. I notice the rest of the witches are gone. Then, in the midst of battle, when the witch sends down a swinging hand. I see the face of a witch pressing out from her flesh like a face pressing through putty.

The witches have merged, this whole time they were working to merge as the queen. This is now do or die, along with the world. The witch continues her barrage of attacks. I am growing tiresome of her feeble attempts. But she will not die no matter what I do.

Suddenly, as the witch strikes at me, I see something lodged in the back of her mouth. Something that appears to be of importance. It has similar qualities of dark marble in the shape of an orb. I then decide to make the witch extremely angry. Hoping she will yell and scream.

I take my staff, thrust it into the ground and call up a Hollow Shield. A field of dim light surrounds me. The witch tries to break through, she has no success. I Smile and begin to call up a summon, I call up Leviathan. A beast of water, it appears from the ground like an up rooting arm.

Its snake like body hundreds of feet long comes storming up from earth. I then ask the beast to flood the witch. A summon can only be used once in a months time. The amount of power to call them is astounding.

Leviathan bellows into the sky as it does a rumble and shaking of the earth echoes out. The witch tries to kill leviathan, but only other summoned beasts can kill each other. Suddenly a giant wave, hovers in the sky.

A Tsunami now starts to cloud the sky. It crashes against the witch, the witch screams and yells. After an intense moment or two, the wave is calm. The sky is now a vast capsule of hovering waters and giant witch.

With the tsunami subsided, the witch, in her cocky demeanor, she laughs as she sees she is still alive. The water only does temporary damage. But as she laughs her jaw hangs open, shuttering with laughter. I then focus my powers to the orb in the rear of the witches mouth.

As she laughs I send out a precision shot, A Silent Crystal. A powerful shot that can kill just about anything that has a spell or holds magic. But is very difficult to aim. I have only fired one once before this. But that was long ago.

I fire the shot, I watch it quietly execute, it flies through the air completely undetected. The witch is still sulking in her "win." But as she starts to calm, the shot passes through her closing jaw. As it does, the witch grows a sudden look of fright. She starts to scream loudly. Agony falls from her scream like rain.

A sudden explosion expands in the witches mouth. A bright light ruptures from her face. The sky becomes covered in light. The witch explodes, becomes millions of dark shards and the black sky vanishes.

The stars return and the night becomes peaceful once again.
-----
Like this story? Let me know!

What about this story did you or did you not like?

Take up a new book and read, A Man's Traveled Heart
Coming soon, The Bleeding of Words