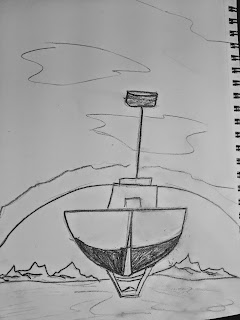 They are two orphans from two different towns. Both searching for that something else, that little bit of hope that will change everything. Both sixteen, both left to the hands of the state at the age of six. Both families unknown, children in the wilderness of abandonment.

Cold, dreary hearts they have. Always staring from their orphanage window. Watching each sunset and sunrise. Feeling a sense of claustrophobia. Both screaming for a chance to be free and soon enough they find that freedom.

On an October evening, just before the sun rests. They both unknowingly each had a plan to escape. To wander off into the world and fend for a new life. Both found a way to rid the orphanage, at least for one night and many more to come.

On this October eve, they both executed their plans. Sneaking past the staff they reached the outside of the orphanage. Passing through the gate and touching the street for the very first time in ten years.

Both their hearts raced with excitement, with the thrill of freedom. Running, they darted into the town. Running and running; after an hour of escaping into the open plains of the world, they both found a graveyard of boats.

Each ventured in with minds filled of curiosity, intrigue. Each explored the abandoned boats with great detail. Feeling, seeing, smelling the surroundings. It is an experience unlike anything they have ever felt.

Such monstrous contraptions are these boats. They tower way above their heads, they look to them with soft hearts. Each is unknowingly standing on the other side of the boat. Overwhelmed with joy and sadness.

Both turn, looking at the rest of the boats that lay abandoned. Looking, the orphans decided to walk to the front of the boat. Walking, they think how these boats are just like them. Each thinks how these boats were once something great, or still could be.

But they have been forsaken, left to the decaying of their atoms. But with the right chance and the right moment. They could become something great again. They could sail back into the oceans and be the carrier of dreams.
As the orphans walk to the front of the boat, they start to hear each others footsteps. They become cautious, they quiet their steps, slowly lurking to the front of the boat. They reach the front and each peers their head from the walls of the boat.

They lock eyes, then quickly hide against the boat. But they smile, as they can feel something special. They then return and peer once more. But this time they do not fret, they smile and say hi. They step out from the boat and instantly start to ask each other questions.

To their surprise they are both here for the same reason. After thirty minutes, they see the sun is starting to set. They both go silent, they watch as the sun gently falls to the background. Collapsing behind the massive ships that lay dormant.

Then, as the sun sets and the sky turns black. They both turn, look at each other and smile. They make a promise to meet here every month till they are free of the orphanage. That night, they both sneak back. They make it without consequence.

Then, for two more years they meet up. They watch the sunset and eventually, they fall in love. They embrace each other with warmth and now find themselves in the freedom of world. Adventuring to whatever places they desire.
-----
Do you believe love is destined for us all?
Do you think it finds us or we find it?

Pour yourself into the pages of, A Man's Traveled Heart
Coming soon, The Bleeding of Words