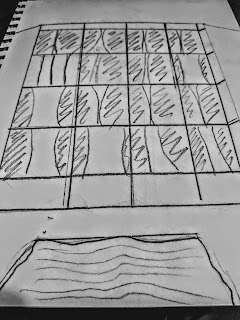 The neon lights flood my view, fluorescent pinks pour from the city. I stand looking forward, watching as she spins around, singing her own songs to the midnight city lights. Her silhouette curves so well with this neon strobes.

A fantasy like aurora floats about her. I can feel her lying next to me still. He warm skin, her soft lips pressing to mine. It is wonderful to be so lucky, to have someone so perfect. As she dances I smile, feeling the moment glow with happiness.

She's dancing alone and I her audience. Applauding with my heart and admiring her with all my senses. She is a brilliant take of life, of creation meets imagination. She is the dream I always wanted. Her hair bounces in the light, like strands of silk gliding against the wind.

I call her name softly, she stops with grace. She spins herself toward me. She leans on the bed with her hands and smiles. We look to each other and my heart becomes wild. It's as if this moment will last forever.

That nothing will change and we will be each other's love for life. Her eyes sparkle, a tint of pink glistens from her lips as she licks them. I press myself to sit up in bed against the headboard. I place my hand out, in honor of her to join me.

She bats her eyes at me and grabs my hand. An instant shock is sent through my entire body. My skin tingles with passion. Our hearts align in rhythm as we collide in this moment. Our skin touches and we are brought to a realm, a world beyond this.

Our spirits ascend like angels and we feel ourselves drift to the stars. We are something more than just what we see. I embrace her as she rests her head upon my chest. I can feel her breath softy wisp off my body. Her ear is on my heart.

She takes her finger and caresses my chest. I then adjust my body so that I may grasp her and hold her lips to mine. We kiss, we become taken with bliss, as we kiss, but I open my eyes as I sense something unnerving.

I look around, our lips still locked. And for a split second I see something. I see a beam of red shining down from the building across from us, about three floors up. I panic with a hopeful strategy, but it is too late.

My darling becomes the victim of my life. I should have known we were being watched. I can't run far enough from them. Not even the stars would be safe. In my desperation I rolled her off the bed with me as she was hit.

We crash upon the floor, I held her in my arms as more shots were fired. I then rolled us under the bed. I should have went the extra mile and asked for a bullet proof room, but it had been years since any incident. Guess they wanted me to become comfortable....and I did.

More rounds hit the bed and I think, "At least this is bullet proof." I can hear the rounds hitting against the steel plate under the mattress. As I wait for the rounds to stop, I hold Lisa in my arms, calling her name softly. Desperately feeling her face, hoping she will wake.

I slide my hand down her back, I feel the blood from her wound. I remove my hand, my heart drops even further. My throat becomes dry as I look at the blood of my love.

"Stop....stop the frame right there!"

Sergeant Rolls remove the VR from my face. I look around, Rolls points to the screen. "You see that Ev?

At first I see nothing, then as I approach the screen closer I see something in the reflection of the window behind me as we are under the bed. Someone is standing right there, on the other side. Just where the hall ends.

I look to Sergeant Rolls, "Who is that? Can we zoom in on that?"

The analysts starts to run his software to analyze the face on the window. After twenty minutes we get something.

The analysts brings the face up on the main screen. "The software analysis is 85% accurate as of right now. Maybe if I can do more 3D examining I can get a better outcome. But with what we got this is your guy."

On the screen in large letters reads, "Reese Elsworth."

The analyst begins to talk about him, " Reese Elsworth is a wealthy man turned hit-man. He inherited billions from his father, but their relationship was terrible. Reese quickly turned to burning down his father's reputation and ruining everyone's life that helped his father. He now does contract killing while finding time to murder those he has a grudge against"

I turn to the analyst, "But, why would he want to kill my wife and not me? She did nothing and I have no idea who this Reese guy even is."

The analyst brings up numerous files to the main screen. "Ev, you were actually one of the agents to help his father get nuclear weapons across the border of Iran to Iraq in 2012. Which have been used to help nuclear weapon expansion in the middle east."

I stand with conviction as I reply, "I was told that we were getting those across so we could dispose of them. Not use them! Man, I was so naive in my early days as an agent. So you're telling me, this psycho kid wants to kill me because he thinks I helped his father out on purpose?"

The analyst laughs a little, "Yes, and this kid knows how to hold a grudge. I am assuming he is wanting to draw out your suffering. It's already been two years and look at you, you still look like a disheveled mess."

I resent the words of the analyst, so in my anger, I reach over and toss the nearest item at the him, a three ring binder. The analysts lifts his arm just in time to block it. The room becomes hosted in an awkward silence.

The analysts apologizes, "My bad man."

I say nothing, I look to Sergeant Rolls and say, "I want everything I can get on this guy, I want him dead yesterday."

Rolls looks at me with vengeance in his eyes, "Alright, but this is a personal vendetta, so you will be solo on this. You'll have very little help. If anything happens to you, we know nothing and you will never be spoken of again." Rolls pulls a cigarette out of his pocket and lights it.

I start to walk out and as I reach the door I say, "I either get this bastard and end his pathetic life and get my revenge. Or I die and am returned to my wife. Either way.....I see only wins."

Sergeant Rolls nods his head, I exit the building and head out to prepare.
----
Do you know anyone that can hold a grudge forever?
What do you think will happen next?