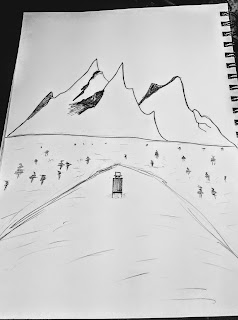 Therby is a man of science, of thoughts and genius. Every night he delves into his mind and plucks from it new ideas. He would plant each new idea onto paper. Quickly skimming through his mind like a comb through hair.

Every now and then something would stick. Something would become tangled in his mind. An idea that he would have to fight to pry from his entwined neurons. As they send an encrypted idea from all parts of his mind.

Shooting like a needle pricked upon the finger. On such ideas he would find himself lost from all others things. Lost from his daily errands, meetings, or any such other endeavor he would have. Many times, Therby would forget to arrive for doctor appointments for his treatments.

Treatments for his deteriorating body. He was diagnosed with Bright's Disease. The treatments given were opiates and the occasional blood letting. But Therby preferred finding himself enthralled in solving the idea that would ramble in his head, than to deal with his sickness.

He was only thirty before the disease took him. But during his life he let nothing keep him from enjoying the thrills of life. For him, the thrills of life were creating new inventions. Coming up with the next design that would change the world or make a cure for a disease.

But sadly, through all his efforts and all his stacked degrees. Nothing of his ever came to light. For he had difficulty finishing his work. He had difficulty no letting the next idea become the priority over what is incomplete. His office was a shamble of ideas spread like tossed papers of an angry writer.

He was a man of manners but lacked the social adaptation to be well versed in social settings. He would often lose track of his words if too many stood before him. In settings of small enclosed places with more than two people. Therby would quickly become anxious and have to leave.

He was a man of genius but a man of poor understanding of himself. He refused any help, he refused even an assistance to keep him organized. He thought such help would cloud his thoughts and his better judgement upon his works.

Though socially inept, he did find himself a wife but, the marriage was short lived. Three years he was married, to a woman named Sally. She was a genius herself but in the world of politics. Therby loved her, but they never found common ground in their passions.

They both struggled to love each others passions. After separation, Therby became more recluse than before. He drew up hundreds of idea. Inventions, tools, and even possible cures of sickness. Which many would have been used, but before he died, he wrote in his will that all his belongings be either burned or sunken to the deepest oceans.

He felt if any were to touch his work, it would surely be misused or torn from what he imagined it should be. So over time as Therby grew more ill he became a silent mad man in his work. But his fear of the social world and the fear of his work meddled by others hands, kept the world from his genius. From the possibility of great change.

And so, on his last day, he was found deceased, breathless and pale. Sitting in a chair at the top of the highest hill on his land. Wearing his best top hat and his tailored tuxedo Sally had made up for him for their wedding.

His best friend Fair had found him. Fair was his only true friend, the only one that could understand him really. But Fair had taken up a position as a professor in another part of the world. It had been eight years since they ever seen each other.

The day of Therby's death, Fair wanted to surprise Therby by showing up without warning. But unfortunately Therby's sickness had gotten to him too soon. In Therby's right hand as his body sat lifeless was a letter, Fair pulled it from his hand and it read.

"I am no man of genius as they say. I am merely a man who is not afraid to go inside his head. I am just a man who enjoys the presence of thought and a man who is passionate about making ideas come to fruition. Though most my ideas never became reality, they were still a part of me. Still pieces of me waiting to be completed. I feared that, I feared that if I completed my ideas I would have no place for any others. I feared my own ability to be triumphant in creation. So here I am, overlooking the beauty of my land handed down to me through generations. Her I am, frail to a sickness I ignored and feeble because I gave fear my voice. The only time I did not fear, was when I was working alone. There, in my work I was me, I was everything I was and nothing more. But that was a lie, I was nothing. I was an incomplete man like my works. Afraid to step to something new and become something great. I am sorry I failed the world though I wished to change it, to improve it. To give hope to the ill and breed innovation to business and the ordinary man. I was to fearful of others and fearful of myself. May someone else take my place and fulfill what I did not.

God Bless and I pray hell will not be my home."
---
What do you think was Therby's issues?
Can you relate to Therby?

Sometimes it is better read with pages to grasp to, A Man;s Traveled Heart
Coming soon, The Bleeding of Words