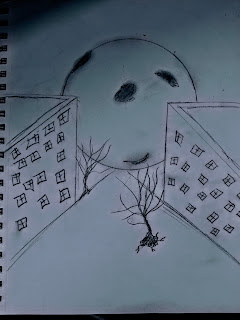 It's a cold winter morning, before the sun has risen. Snow covers all inches of the neighboring surroundings. The sky is engulfed in dark feathery clouds. The air is silent as the soft trickling of snow obscures with beauty.

On this cold winter morning, a young boy, the age of thirteen wakes from his slumber. From his dream of dragons and wizards. He opens his eyes slowly, gathering himself into reality. Like picking the last few pieces of a puzzle.

Awake, he sits up in his bed, as he does, something strange rushes through his body. He loses his ability to breath, but only for a moment. His skin flushes pale as he loses breath. What ever passed through him. It felt as if it was a dark presence, something ghastly.

The boy, feels his body regain control, his lungs fill with air. A sigh of relief overcomes his chest. But as he sits, he ponders the presence he just felt. He then remember such a moment, one as exact as this; but in a dream.

It happened only a few months ago. He quickly gets out of bed and steps over to his desk. He opens the drawer that sits in the heart of the desk. He reaches in and pulls out a drawing book. He places it on the desk and starts to flip through it with some haste.

As he flips through the pages, images drawn in only black are scene on each page. Images of ghosts, beasts and creatures of unknown darkness stain each page. He suddenly stops, he finds a drawing of himself, or at least that is what he believes it is.

For the drawing is of a boy in a bed sitting up with a shadow of black passing through his body. There are no faces, as the boy in the picture is but a shadow as well. Two shadows, two separate creatures.

As the boy observes the drawing, he gently glides his hand across it. As he does, he is over taken with a vision. His eyes roll to the back of his head, his body drapes back over the chair he sits in. The vision is blurry, like a dream.

He hears a voice calling his name in a whisper. "Marcus"

A chill hits Marcus's body as the his name is called out. His vision suddenly becomes clear. It looks as if he is awake, everything looks as if it is real. Marcus can feel himself, he can feel his lungs filling and releasing with air.

Marcus looks around, he is standing in a dark alley, an alley with twisted trees and building scaling only a few stories high. They are all abandoned. As he looks to the buildings he starts to see eyes in all the windows.

Eyes that glow with a dim white light. He starts to feel terror wrap around him. He then looks up at the sky, the moon sits directly inside the alley, just above the top floors of the buildings. It beams with a ghostly blue.

His name is whispered again, he hears it coming from the far end of the alley. He is drawn toward it, he starts to walk. The further he walks toward the whispering voice, the louder the voice becomes. Till its sounds as if whoever calls him is right next to him.

He reaches the end of the alley, at the end is only darkness, a wall of pitch black. Marcus reaches into the darkness and is pulled in by it. He then appears on the other side, he looks around quickly. Checks over his body. He then realizes he is back at his desk.

He looks down at his drawing book. His eyes dilate with fearful surprise, for on the page before him, is the drawing of the alleyway. Detailed as if was still there.

To be continued...
---
What do you think is going on if anything?
Should Marcus follow deeper into his dreams or leave them alone?
----
Grab my stories with your hand,  A Man's Traveled Heart