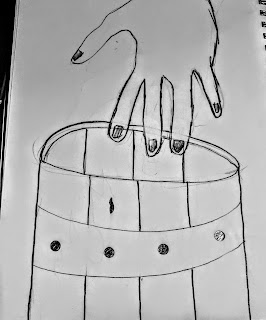 He was worn from his constant need to pull through the day. To stay awake in thought with every second. His chest beard heavy and his eyes could see no hope. He could feel his world around him shrink.

Colors that were once vivid are now dull. They settle upon his view like rain, casting streaks of sadness upon his eyes. He feels nothing but sorrow speak with his burdens. Lost for so long, so tired, so anxious to be free.

He finally decided a enough was enough. He took his heart, pulled it from his chest and placed it in a bucket. He then took his pain, his misery and did the same. He poured as many tears as he could into the bucket.

He could hear his pain crying, he could feel his misery spill with agony and his soul weep. But as he mixed, the once dark colors that clashed, now began to shine. Colors of vibrant greens, blues, colors only thought in imagination sprung from the mixture.

It became a viscous texture, like paint. As he stood over it looking in as he mixed it. He could feel it radiate. A sense of happiness permeated along side the sorrow. He could suddenly see the view around him was no longer of darkness.

His bleak eyes could see, his soul could feel color once again. Standing in his empty home, overlooking the bucket of emotions. He dipped his hand in, letting it soak around his skin like a brush. He then pulled it from the mixture, it was warm, it felt like a thick batter for cake.

It smelled with scents of mountains, oceans, and sadness. Images could be seen in its reflections, much which were recognized memories. Painful and happy reflections fell from the dripping mixture. As it dripped to the floor he watched it settle upon the wood.

It seeped through like water to paper. It took to the wood floor and brought it color. He then took his hand and placed it upon the wall in front of him. He brushed his hand across as if to paint. He smeared the wall till it was completely covered.

Till the blemished wall of white, became a canvass of color. A canvas of dreams, memories, a canvass of hope. He could feel himself become released. He could hear everything he had ever felt. But he could stand and look with appreciation.

He saw himself upon his wall. He saw the misery he fell to and the happiness he once held. He could see the mistakes that ravaged his heart and left great regret in his throat. He could feel and see it all. He watched as the colors reflected like a movie.

He watched for hours and for hours tears fell from his face. He had finally allowed himself to feel to be, to accept and see the journey of himself. Though much was to his dislike, he found new reasons to be.
-----
Have you taken the time to reflect? Accepting your mistakes and moving forward.

My book can be found at, A Man's traveled Heart
Coming soon, The Bleeding Of Words