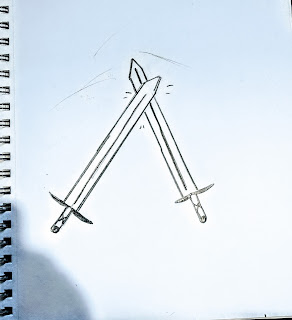 The brothers collided, their eyes filled with rage. The sky sprouted with lightening. The earth burst with flames. Their wing, span from soils to clouds. The world became their battle ground. Greed filled them both, neither was satisfied.

Each wanted more and more. Each wanted plentiful women, riches, and fame. Each wanted stories written of them that would last them beyond life. Where they are praised for their efforts and ignored of their sins.

But the day came where both were equal, where they achieved what no other could. Fame and riches that expanded far past their wildest dreams. Where ever they walked they were revered. Many who saw them would bow in reverence of their presence.

Begging to kiss their feet like a poor man for change. But they treated the world how ever they wished. Feasting of flesh with every morsel of their being. What ever craving beseech them, they would take.

Many women fell to their power, weakened by their mere looks. But those that did not, were enslaved to mine their wealth or executed for their denial of pleasure. The brothers were ruthless, taking all at will leaving nothing without satisfying their temptations.

Their minds salivated with lust for all things. They were killers, lovers, gods, and actors. They were everything any would wish to be. They filled their belly with the finest foods every night, feasting till slumber would take them.

They would speak to no man in polite tones, for they saw all men as peasants, as grains of sand to be washed away by their rule. Those that defied were slaughtered, those that bowed, were given life. But in the pursuit of heeding to the brothers request.

The brothers felt benevolent upon the world. They were conquerors of all. Everything they touched became their's. They took lands from farmers, business from wealthy men, and took daughters from families. They were bloodthirsty, killing whatever they felt should be deceased.

They trampled forests, villages, and mountains. They crushed all things in their path. They became the gods of earth. But never did they walk together, for neither thought the other worthy. Never did they see eye to eye.

If they did see each other, violence was their only thought. To rip either's head from their shoulders and toss it to the sun. But what they never noticed, is they were equal. They were equal in hard work, equal in devotion to self and those women they loved. They were equal in thirst for death, for destruction and power.

Each was equal in all things they did, but they could not live with such a thing. This was unknown to them till the world was worn flat. Till the earth was but a smooth sphere of massacres. No hills, no mountains, no landscape to separate soil from soil.

Only two massive statues remained. Statues of either brother. The population of the world dwindled as they caused destruction. Till all that remained were their accountants. The brothers had taken it all. No breath of life existed but themselves.

So on the day of their birthdays, when the world praised them for two weeks, there was silence. They both stood waiting, with chins raised and chests puffed. But no roaring of crowds approached, no voices of hymns sang and no feasts were placed before them.

Instantly they both grew angered. They screamed into the air with rage and quickly blamed it upon each other. They ran from one side of the earth to the next. Colliding into each other with great resentment and blame.

Days went by as they fought. The world trembled beneath their feet. Lightening struck the earth and struck their flesh. But their rage for one another gave no attention to the earth's harsh effects. Soon they grew tired, soon they could fight no more.

Wounds scattered about their bodies like freckles. Both bled from their lips, their nose and faces like beaten children. Both wore cuts from their blades and both eyes showed of exhaustion. Soon they collapsed. Tumbling to the ground till they could move no more.

The earth shook as they fell, they looked around as they both laid upon the ground. The earth was silent. Nothing but the sounds of their chest relieving of air could be heard. The storm ceased and both looked to the stars.

After a day of rest, they decided to ask their accountants to divvy up their wealth and accomplishments. So they did, four weeks passed by and everything was tallied. From the amount of music they composed to the amount of food they consumed.

And when both accountants came to show their results, they were exactly the same. Each had the same wealth, the same amount of kills, of women and food. Each was exactly the same. Upon seeing the results both became angered once again.

Again they fought, but this time, there would soon be no place to fight. Eventually their greed, their narcissistic view led them to a crumbling earth. The earth became but a spec in the infinite. Both brothers were flung into space never to be seen again.

It is believed one was taken by the sun and the other lives upon the moon, deep within its cold and bleak existence.
-----
Are you competitive to the point it destroys you and those around you?
Do you push yourself to the point of destruction sometimes?
Are you a person of results over growth?

More to be explored in, A Man's Traveled Heart
Coming soon, The Bleeding of Words