An Ex and In the Head 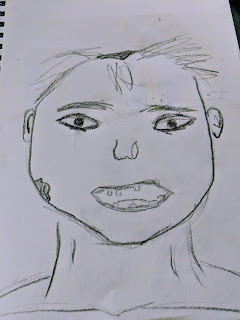 An Ex and In the Head

A disturbance came from the back room, Alice placed down her book and approached the door to the room. It was a cold evening alone. It was her first night absent with her lover. They had broken off their love due to career choices.

Alice was always the one driven to work till madness of exhaustion over took her. She finds her twenties to be the opportune time to supply herself with a giving future. But her boyfriend did not. Though Alice is alone tonight, it feels no different than she was in a relationship. For she was mostly alone working anyways.

Approaching the door, she could hear a rhythmic thud, as if someone is repeatedly stomping their feet upon the ground.

She placed her ear to the door and carefully listened. But when she did so, the noise ceased. She then lifted her head from the door, the noise started up again. She stepped back with a gentle touch of fright. As she looked to the door with curious eyes, a gust of wind fluttered in from the room she just left.

It carried to her and swayed her dress. The brisk air caused the hair on the back of her neck to stand. The noise then grew louder. Now the sound was much clearer and resonated with command. Alice, with a brave attitude placed her hand on the door knob to the room.

The sound stopped. But another flutter of wind came from the other room. But this time, the wind was even colder, it caused her surroundings to feel extremely chill. Frost permeated from the air and caught to the windows in the hallway.

Alice began to feel a little frightened. But she started to turn the door knob to the back room anyways. The twisting and clattering of the doorknob sounded much louder than usual. Alice did her best to keep the motion of the doorknob subtle.

In hopes what was ever on the other side would not hear it. Once the doorknob was completely turned, she gently pushed the door forward, carefully looking pass the widening gap of the entrance.
As she opened it, she could feel the air was cold.

She extended the door completely open. She looked into the room as her breath took to the cold air. But there was nothing in the room. The room is empty, it was emptied a week ago, it was her boyfriends office.

She then stepped inside the room and looked to the window. It was odd, the window is shut but the room is terribly cold and the heat is on in the house. She then went to turn away, but as she did, the door swung shut, her hand was holding onto the door frame as it closed.

It shut on her hand caused her to scream in frustrated pain for a moment. Once she got herself back together, she pressed the door open. She was slightly bent over as she did, she was looking at her now damaged hand.

It pulsated with a heavy dull pain and there was a clear mark as to where the door hit her hand. She then leaned up, and there before her, stood her ex-boyfriend. She jolted back with fear and said,

"What the hell?! What are you doing here, whats your problem?"

Her ex stood with blank eyes, his skin as pale as snow, and his lips as dark as shadows. Alice stood in the entrance of the other room. Her ex continued to say nothing, his clothes tattered, as if an animal had ripped them apart.

She asked again, "What do you want?"

Her ex then started to reach out slowly, his head contorted to the side and the sound of bones breaking in his necked echoed. Alice became disturbingly scared. She moved away from her ex, stepping back further.

Her ex then approached her with awkward steps, as if one leg was broken and other sorely injured.

Alice then yelled at him, "Get away, what the hell are your doing, stop!! You're scaring me!"

Blood began to pour from his mouths, grunts of pain gurgled from his throat. Alice then turned around and ran to her phone. But it was not at the side of the chair where she usually places it. Her eyes grew wide with concern, she turned to look and see where her ex was.

He was gone, vanished, she then turned back to where her phone should be. Howling cold winds started to burst from the open window of the room she is in. She started to shiver, the temperature dropped rapidly. She then looked back to the back room.

She screamed, her ex is right in front of her, towering over her like a falling tree. His arms draped to his side, his eye staring past her. She then pushes him back, he stumbles and falls into a stack of books.

Alice then panicked and tried to run away and exit her house. But when she tried, her ex grabbed hold of her leg. He instantly pulled her down, his grumbling of pain grew into a shrieking scream as blood curdled from his mouth.

Alice screamed some more, she tries to fight him off. But her body suddenly becomes weak, almost paralyzed. She can no longer move, she becomes completely still. All she can feel his her ex crawling up her body like an oversize cockroach.

She sees his hands grabbing her arm as he makes his way up. She tries so hard to scream, but she can't. She can do nothing. Just as her ex grabs hold of her head, the floor beneath her opens up like an abyss. She feels herself fall, her ex falls past her like a limp doll.

Suddenly, Alice feels something different. She looks around and sees she is back in her chair where she was reading and in her hands is the book she is reading. The Night of His Return.
-----
Have you ever had a nightmare that felt extremely real, what was it about?

Check out my debut book, A Man's Traveled Heart