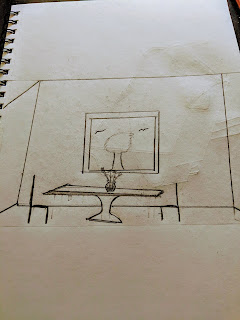 I started my morning as I always have. I woke up, smashed the dismiss button on my alarm and rose from my bed. I tossed my blankets from my body and turned myself so me feet could fall freely to the ground.

I gave out a yawn of exhaustion, as I rubbed my eyes to clear my sense of early morning confusion and slight resentment of waking before the sun. I then stood off my bed and turned around to tidy its rambled mess. Making sure my bed is in order so I am not in disgust of a disheveled bed after the end of my work.

Having my bed in order gives me pride in my rest, it shows I care enough about where I lay my head. After making my bed I walked over to where my towels hang and wrapped one around my waist. I then opened my door with half opened eyes and silent thoughts.

I walked over to the bathroom, closed the door, hung my towel and started the shower. After about fifteen seconds, I jumped in the shower. While in the shower I looked through my phone to find the right kind of morning music to slowly wake me from my fuzz of deep sleep.

I chose piano this morning, calm, yet powerful. The delicate ivory notes caressed my restless body and mind with ease. The tones and melody brought me relief from the agony of my exhaustion. No day goes by anymore where I am not dripping in a tiresome morning from the day before.

I am always sure to press myself into my work and bring my abilities to their fullest. Till my mind can no longer think and mistakes are all that are left. As the the beauty of the piano played during my session of skin purification, I started to think about myself, about life and what I wanted the next step to be.

I started to think about marriage, family, and a life time of love. I thought about my girlfriend, how it has been three years. Everything is in perfect harmony, our hearts, our smiles, our passions line up so well.

Not a day goes by where I am not excited to see her. To hold her and kiss her and tell her how beautiful she is. She brings such joy, such excitement and adventure to my life. My heart still floods with nervous rhythms at first sight of her in the day.

She is magical, a rarity of perfection and love.

I concluded my thoughts and my shower. I turned the water off, stood in silence for a moment as I gathered my thoughts. I shoved the curtain aside with excitement as I reached for my towel and dried myself off.

I gleamed with the brightest smile ever. I brushed my teeth as thoughts of marriage glued to my mind. I cleaned myself up well and then headed to the kitchen. Made my usual breakfast, ate it, and then called my girlfriend.

Calling her, my heart was racing rapidly, I had to remain as normal as possible. For today is the day I will ask her. I have been planning on how I would do it for the past three months. I will propose to her under the bridge we were both jogging under, where we bumped into each other. I would have her meet me there at dusk.

After a few rings she picked up, I was definitely not my usual self and she knew. She could her the slight nervous inflections in my voice. But I eventually got our conversation to branch off to meeting up for lunch rather than what is wrong with me.

After we talked I said goodbye and told her I loved her. We both hung up and later met for lunch. Prior to lunch though, I picked up her ring that she would be wearing that night if she so gave me the honor of being her husband.

It was the largest diamond I could afford and matched the color of her eyes, jade. I know she will love it, she has too! As we sat down for lunch at our favorite Mexican restaurant, there was surprisingly little conversation between us.

At first I thought it was just me being nervous. But it wasn't, I had asked her how her day went, she said it was it was fine. That she did not want to talk about. She just wanted to eat lunch and get back to work. I didn't find it worrisome at first. For there have been days like this before.

All she ever needs is some time to herself so that she may place things in order before talking about what is stressing her out. So, the hour or so we were at lunch, about half was us sitting silent and eating. But even though lunch was stale and filled with stressful air, I was excited about tonight.

I kept smiling at odd times and she would ask why and I would just say, "because I love you." She would do a small smirk, but with eyes of guilt. I wasn't sure what was up until we got the check. The waiter came over and asked if we wanted one or separate checks.

At the same time, me and my girlfriend replied, saying,

I said one, she said separate.

I immediately looked to her with confusion. My stomach became instantly tied in a knot. I then asked what was going on. She's never done this before, I have always gladly paid except on our first few dates. She insisted we keep our checks separate till we knew for sure we would be dating.

She was always the type to make sure things were concrete before moving forward. I, on the other hand tended to rush into things. She was my guide from such a thing. But now, now she no longer is. We are no longer anything.

After our simultaneous answer about the check for lunch and me asking her what was wrong; she broke. She started to cry and told me she cheated on me. At first I was in disbelief, shock, maybe I heard her wrong I thought for a moment?

But I didn't, I heard correctly. Her face was flushed with embarrassment and pain. I stood up, handed the waiter cash for the lunch. I then asked her why and with who but, I remained calm, but only from the disbelief I had in my head.

She told me it was with a guy she dated a few years before me and that she did it because I am not successful and she is tired of waiting for me to "hit it big." The waiter came back with change, it was a fifty dollar check and I paid with a hundred. I told him he could keep the change, he was hesitant at first but I reassured him it was okay.

My girlfriend then proceeded to cry and tell me she was sorry and how she feels bad. But I stood there, slowly feeling my heart sink, my stomach become nausea's and my head spin. As she cried I just looked to her with anger and sadness.

She ripped my heart from my chest, why couldn't she just have told me what was wrong between us instead of murdering me behind my back? After a few minutes, which felt like hours. I approached her and hugged her. I then told her what had happened to me a week ago. It was going to be a surprise for tonight.

I had reached my goal finally, I had sold thirty thousand copies of my book and made a million in investments. I had finally become the success I always wanted and what I knew I was capable of. But, I guess, my girlfriend never thought I would make it and I guess she did not have the patience for my goals.

After I told her, I let her go and left the restaurant. I called up the realtor to a house I bought a month prior and told him to call his moving company his friend owns and have them move my stuff tonight. I now sit alone in my home, enjoying my success. The success I thought me and her would share. I never told her I was going to marry her. I felt that had no place in our relationship.

More relatable thoughts and stories in, A Man's Traveled Heart
Coming soon, The Bleeding of Words