The Blue Wolves Are Coming 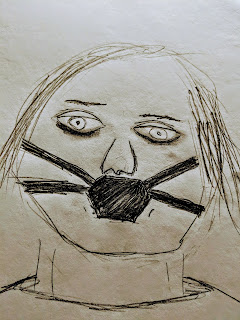 The Blue Wolves Are Coming

Tonight I write from my friends chambers in haste. The dogs are barking and the whistles are blowing. The fog has settled densely upon the streets, allowing me temporary escape. It will only be a few moments before I am ravaged by the jaws of canines or thrown to the ground and shackled for the remainder of my life.

I am part of a secret society, some call us "resistors," we merely call our self free people. We are freethinkers, we have been watching the world degrade into a child's toy. Adults no longer observe their emotions and take thought. Rather, they act now with a stasis of belligerent obsession of identity.

Calloused to logic they bore tunnels of fantasy building lies that suit their tongues. Blaming their surroundings for their harsh reality. They bring no responsibility to their character, but force the world to shift as they do.

Many of us now clothed in the color of red, to signify they are workers of prison. Free to roam as they please but may neither speak nor write. They walk with muzzles upon their faces and are allowed no such feeding of the body unless at home.

They are on constant watch by the policing state. They are crowded into ghettos like cattle to the slaughter. They are counted as if tallied for a task, if one is missing, there is no rest till they are either found or killed, which ever the Ivory Tower wishes.

As I write this, I am hoping others will find this letter before the "Blue Wolves" do. They are who leads the world now, who leads our country, our thoughts. People such as I, must be vigilant as to what we say and who we accompany ourselves with.

If any Blue Wolf smells any foul play among their people, they will string you up for the world to see. You are lashed for your "Treason" in the streets. You are given no court hearing, even if they find evidence you speak no ill will of them.

They will conceive their own truth and bury any existence of hope you had beneath forged layers of lies. For their appearance is crucial over the truth. For if they are found of lies, then their people will be of liars themselves and quickly find disgust in their own behavior.

You become less then human to the Blue Wolves. Subhuman, a stain upon their existence and so you must be cleansed.

If you do not succeed to their wills, you are sentenced to death, or worse, sentenced to life as a mockery of the streets as the rest of the redcoats. I will surely choose death, for I am no coward to what I believe.

I will allow no man, no woman, to tie me down from my belief's and make me a slave to their inquisition. I am a free man, as are my people of our society. We wish nothing but the freedom to speak how you wish, live how you wish, as long as you bring no wishes to force your life upon others.

We once shared such thoughts which crossed all likes of the country, of the world. But somehow, our world became twisted, criminals were no longer criminals, they were "miss judged." Quickly the Blue Wolves felt bereaved of the criminals situation. Unshackled them and lent them freedom.

Quickly, did the criminals turn to their own ways, rabidly did they annex much of our country. Walls were put up to separate us from them. Though, from the start, the Blue Wolves frowned upon any sort of separation, unless it sheltered their thoughts from those who opposed them.

They have bent their words to feed the weak, the mentally incapable. They sewed desperately to take what is not theirs and feast upon it like the devil upon flesh. As I write this, I can feel my spine tingle as the police rage closer to my location.

I can hear their foot steps pounding on the stone pavement. The fog is wafting in from beneath the door and finding home at my feet. I must rush, I have no time, the corruption has spread to our law, to our own people.

No longer does the government wish us any freedom. We are taxed for the amount of time we spend out of our homes. We are insurmountably taxed for food, for water, and any business we start, upwards of thirty to forty percent. Dependent upon where you live.  If business is your choice, you must first be approved by, "D.O.J.D," Diversity and Justice Department.

There is no freewill, no freedom of any sort. The Blue Wolves have sunk their teeth into our countries neck and are bleeding it till it runs dry.

Then they shall move toward a new, weaker system, frail, ready to be devoured by the Blue Wolves. For their lust of power knows no end. They crave the bitter taste of the weak, of the defenseless and poorly educated.

The leaders of our "free" world give no chance of opposition. There is no logs of their meetings, their connections. They are all ghosts among the world and hide well behind their legislation.

They bear all the fruits of our labor as the poor are now the masses and the criminals are the wealthy. I must go now, the police are knocking on the home next to me. I can hear the growling of the dogs and the stench of corruption billow from the air.

I bid you good luck and farewell to whom ever reads this. If you do find this, you must reach out. We are the ones that cross our fingers as we pass by. Node twice in passing and we shall reveal ourselves.

I must go, I must hide this letter before it is too late.
-----
In a world without freedom, where safety and comfort come first, do you think it best, safety over freedom?


Intrigued? Allow yourself the chance to hold such stories in your hands
A Man's Traveled Heart