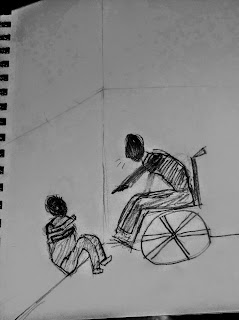 These were the words of his father every day. Drunk off his depression, his anger his dad led a life of secluded suffering. His son, the blunt of that pain. No reason for such animosity but the boys father was a reckless, unstable, emotional pinball.

His breath foul from drinks daily. His disability check from an injury from a public vehicle crashing into him, paid enough to cover the bills, feed himself, and buy drinks. His son gathered what ever left overs he could find.

Or he would scroung through the neighboring trash cans. The boy was kind, sweet, he never raised his voice to anyone, except himself. On some nights, his father would lay into the boy with verbal accusations and character attacks.

Other nights, his father would be too drunk to really speak so the boy would be victim to physical abuse. Slaps across the head ending with the slurring words of, "Why are you so weak son?" or "I didn't raise a failure, yet here you are!"

On many of these terrible days the boy would place himself in his room and stand in front of his mirror and ask himself with a raised voice, "Why can't you do what father asks, why can't you be better...why...why...why?!" Ending each night with tears of hopelessness.

It was a brutal upbringing and still is. The boy is now ten and is starting to question his own existence. His father was a very successful man at one point. He worked at a hedge fund but his disability left him impotent from the waist down. He fell to his pain and became an alcoholic, losing everything.

Yet his father still prides himself on his past. Directly judging his son for what he does today. Always telling him to do better, to stop whining when things hurt. "Why can't you be successful like your old man?" As he drank from a whiskey bottle.

The boy, now aware of his suffering in a different light. Began trying to understand his failures, he wanted to be successful like his dad was, to fit into his shoes. But he felt incompetent at each moment he tried anything.

He could feel himself being overshadowed by the history of his father. His mother tragically took her life fiver years after his father lost his job. Finance took hold, along with a broken marriage. Affection for each other was quickly snuffed out like a candle by the pinching of two fingers.

All that remained was the rising black smoke in signal of surrender. Now, the tension between father and son is at a constant. The boy, feeling the need to impress his father, or at least design something to make his life a little better. He then decided to go out and make something. The boy was good with his hands, he was more of the engineering type rather than the financial type like his father.

So, one day the boy went around the neighborhood finding pieces of scrap metal and other items people had thrown out that he might find useful. So, as his father was passed out drunk, which usually lasts for half the day he gathered up as much material as possible.

Once he felt what he had was sufficient, the boy brought it all back in a little red wagon. His light brown hair danced in the front as the wind whispered by. Once home, he did his best to quietly bring all the material up to the attic.

He then grabbed all the tools he needed from an old black wooden chest in the attic. The chest had his named carved crossed it. It was a gift from his parents when he was born, it was used to hold all his stuffed animals. But after a bit of time the father thought it was time for the boy to grow up and he tossed out all the stuffed animals and turned the chest into a tool box.

The boy grabbed the tools and got to work. He sang to himself as he worked, songs his mother enjoyed listening to. After about nine hours of work, he was finished. He then walked down stairs and went up to his father.

His father, in a drunken stupor, the boy woke him with numerous pokes and prods. His father grumbled a few times before waking up and spewing out, "Get out of here boy I'm tryin to...."
His father, in his waking saw his boy standing, but he was standing taller than usual. His father was greatly shocked and confused.

The boy is wearing a metal suit, an exoskeleton. He stands now as tall as his father if his father was capable of standing. The boy looks down at his father as he sits in the chair with drunken eyes and a flush face of red.

The boy then grabs the fathers shoulder via the suits hand. There is adequate enough pressure for his father to become concerned. "What are you doing boy?" As he presses himself up in his chair. The boy then slides the hand down to his fathers wrist and grabs it tightly.

"Owe boy.....you best let me go right now...!" He drops his bottle of whiskey on the floor. The boy then twists his fathers wrist just with the right amount pressure to make hit hurt. Grabbing for the suits hand that holds his wrist the father says, "Boy....what do you think you're doing?!"

The boy says nothing. He just glares at his father from his rusted and apocalyptic suit and starts to drag his father by the wrist. He drags him to the other side of the house. His fathers struggles from the floor as he tries to remove his wrist from the grasp of the suit. His legs drag behind like loose rope.

The son then stops at the basement door and opens it. There is a concrete landing at the entrance. He maneuvers the suit to turn and place his father on the landing. He closes the door, his father starts to yell...."I didn't raise no coward, now get back here and let me out......boy, when I get out of here you'll be sorry....you waste of breath, I knew I couldn't trust you..."

After a few minutes of his father yelling he eventually went silent. His drunken body lacks any energy to proceed or fight his way out from behind the door. The boy then exits the suit and walks up to the door and reaches into his tattered jean pocket and removes a key.

He locks the basement door, places his ear to the door and tears fall from his face. His heart is racing as he thinks about the consequences if his father does get out. But after locking the door, the boy says to his father.

"Dad, I'll let you out when you start respecting me for who I am and start forgiving yourself. Mother was always about forgiving, but I think she forgot about that."
-----
We all have the ability to get ourselves through any suffering, but we must find what that ability is and use it.
We must also learn to forgive ourselves or we can never move forward.

Have you forgiven yourself?

More stories can be explored and found in, A Man's Traveled Heart
Coming soon, The Bleeding of Words.