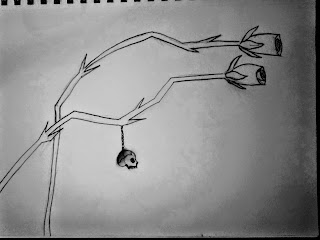 The black roses grow,
Though the world is bleak, buried beneath this vivid snow.
The cold is dreary, it pawns the old. Shivering the soul in travels among the bold.
Seeking for reason to unfold but fright brings concern when one with-holds.

Keeping buds from being exposed in harsh realities told.
A sight of fearful eyes gaze in the empty rolls of the sold
Weary in breath for they have given up control.
Looking for reason to continue to scold.

For rigid has their stem become.
Crooked and holed, like translucent souls, invisible to all.
But pain exists in the thresh of it all. Ruptured hearts fall like rain drops of clouds that hang tall
A drizzle of hope is open but the darkness becomes its anvil.

Weighted it cries, a cracked skull and it becomes dull.
Vanishing to the awful the angled skew of nonsensical babble.
Leaving tongues spread in a hull of deception as weaving breaths of the miserable confess.

But concede with little honesty.
They are boastful in their agony.
Even among the warm hues of the rightful.
Expunge they say, make them whole.

But what reason to be when they rather be the mistral of their journal.
Birthing the coldest words to be heard in a whirling wind of soulful depravity.
Appearing little between the marble of the eye.
As if they are no handle of their own but led by mangled labels of earth, of societies dribble.

Forced to walk with chains they say, marshaled by echoes of the continued barrel of the powerful.
A force of brutality so awful, there is no escape from the battle.
A rotted apple is more fertile to these groveling virtues.

Seeing only darkness as sight, a floral display of death.
Decaying with rapid succession in the girdle of depression.
Keep the world in a mammal state of mental anguish and the hurdles become impossible.

Striking down the attempts of the faithful.
Leading them to the underbelly of the unstable.
Those lavished in thistles.
Horned at every bend like an angry rose that stands only to tussle.
To pronounce destruction for the mere sake of attention, spoiled their lips become.

Undying precedence to weep, poetic they say
But unlikable they become
As unsightly as fractured bone,
Irrational to bend.
-----
What parts drew you in the most and what is your take on this poetic piece?

Poet styles of stories and poetry to be found in, A Man's Traveled Heart
Coming soon, The Bleeding of Words