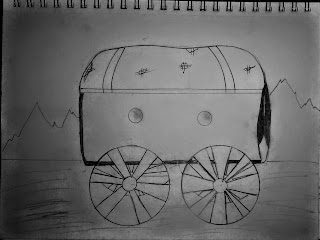 From place to place: path to path, home to home, forest to forest we roamed. No true land to call home, but home was with each other, no matter where we were. Stopping down dark paths in the night, setting camp, playing music beneath the studded stars of the sky.

We were a family of many and a family of the unconventional. Never weighed by the grasp of the civility of society. We were always on the out, on the edge, standing, watching; tempted. At least, I was tempted.

My family never stayed in one spot too long. Never embedded in society, created us not to be welcomed in an abrupt fashion. Either pushed from land by owners, park enforcement, the law, or even animals. My family lived in the wild of the earth.

I must say, in the honesty of it all, we were not the best of people. I was taught to steal, to trick, to lie, so that we may put food on our tables. We were great at hunting, but it is difficult to feed a caravan of hundred and fifty people when you must constantly move.

Hunting is not the most efficient form of gathering when you are never in permanent residence. It was a joy at times, never knowing where we would be. We lived as our hearts desired, well, up until we are forced to move along.

When I was young I never understood why people would push us out. Then, as I got older, I started to see how our way of life did not match the rest of the world. Not only that, my family wasn't the most honest of the bunch. Actually, only about a hand full really were, out the total of the caravan, maybe six or seven of us were.

Those were usually the elders of us. Those that survived through the war but lost everything. They had stumbled upon us at the end of the war. Now they must rely on us, most now are too ill or too old to even be of use.

But if there is one thing about us, we never leave our people behind nor betray each other. Though honest to each other, we were never honest to strangers, to the world. Our families  have been living like this for generations.

How it started I do not know, there are many stories as to why. But how I see it, we don't even know anymore and we just live this way out of fear. We fear losing each other and having to change, but that fear only leaves us scrouning for food and being dishonest.

As I grew I became aware of what we were doing was wrong. Many times I tried to tell others, but they ignored me. Saying what we take and how live is not our fault. But rather, it is the fault of what is outside the realm of us.

That we wouldn't be where we are if we were welcomed, given hospitality by the world. I found this argument flawed, for what we take, either it be for the good of us or not, we gave no labor to such things. We merely push from place to place, allowing ourselves to live on the fringe of starvation.

Our people are slowing dying off from illness. We refuse the use of modern medicine, we refuse the living conditions of now. All in the name of some grudge with some king, or some politician, or group.

All I see, is a mass of disgruntled, resentful, and self-loathing Beings. I love them to death, but they bring no hope for change. No hope for a true living and aspiring to be our best. Much talent rests within these caravans. But are sorely wasted on drunken nights by fires.

Or drunken nights in pubs, only to end up ill in the waking morning lost in the woods. Having and hoping to find the way back to the caravan. We are stuck in the pseudo life of wilderness living. Living outside the so called constraints of society.

Yet, here we are, constrained by the constant necessity to move. Never allowed to plant our flag, raise families on "our" land. My life is a blur of fading browns, oranges, and blues. My world is mashed in a peckish fever of endless nostalgia.

Looking back from one place to the next and as a child, I never felt at ease. My parents were allows strung out on keeping us from the world and finding places to sleep. I can't remember any times we lived in one place longer than a month.

I am now twenty five and have lived in a few hundred different places. My heart is spread thin through out this country and I am exhausted. I am tired of this temporary life and this hold of difficulty as if we are victims to everything but ourselves.
-----
Thank you for reading and hope you enjoyed it, what was your favorite part?

Find more of my spectacular thoughts in, A Man's Traveled Heart
Coming soon, The Bleeding of Words.