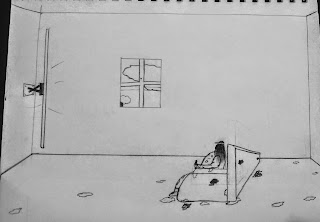 "War is at the edge, I can feel us all standing there." He says as he looks to the stars as a pink cloud floods the night. He feels the world becoming torn. Splitting on behalf of the mentally immature, nothing seems hopeful. He watches as the news marks the world as chaos.

Bleeding words of worry an anxious doubt of any peace. "War is inevitable." He shutters as he stares back from the sky to his flickering screen.

"I can feel the hostility in the air, its thick, like the humidity of the south." He wipes his lips of his drink.

His eyes glued with anxiety as the TV spews with relentless hate and gives bitterness to the mere existence of human kind. He listens and listens and all hope becomes constricted like a kink in a hose; waiting to burst.

His throat tenses as he fills his mind with the drivel of the narcissistic ignorant. Photos of the medias nemesis display with vile rubbish as the truth is distorted in the name of "virtue." Young and old minds splatter fallacies as if it is the truth.

Wildly blaming the angst of the world on ferocious hate. A collective existence that they says exists behind the curtains of our world. That we are falling blind to the oppression that seeks to murder dreams and uplift the wealthy.

Yet, their tower stands high with the wealthiest of all. But they clear their hearts of any ambiguity and lies as they point fingers to the goat. Blood upon their hands, but they say with eyes turned downward, that the blood is but from the stitching of the wounded.

Endless tongues of childish whims scream from his screen like children of feeble parents. Children screaming and yelling till they get what they want. Suddenly an irritable, but familiar voice, appears between the echoes of his screen.

"So be it, take what you will, my resentment of the world, myself, as drawn upon you."

In the hearing of this voice he is clutched in memory as he views himself between the silence of colors on his screen. His hair long, his face covered with unkempt hair and his body, sloshed with depraved care.

But he pays little mind to his disheveled self as the news suddenly pertains to the acceptance of his decisions.

His eyes become solidified in the signals of babble as he drowns himself in the nauseating thoughts of the news. But he will not and cannot seem to look away. Though an insistent call of frustration presses from his gut; he forfeits to the narrative.

He falls stricken from life but is given praise by those as meager as himself. Those with no care but to be the "virtues," the "originals" to bring change.

The news ceases, its twelve AM, he's exhausted. He finishes his drink and wipes the excess that dribbles down his face. He belches in resistance of the carbonation and falls to his bed; as he turn his thoughts to his condition to the overwhelming oppression of the invisible.
----
How do you feel about the way our world is today?

More provocative stories to be found in, A Man's Traveled Heart
Coming soon, The Bleeding of Words.