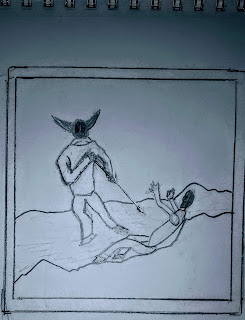 The demon outstretched its hand. I could feel the heat of misery swell from its body as he peered from the darkness. My pale skin glowed in comparison to the depth of this darkness. I could feel my resentment in my blood boil.

As the demon held out its hand, I felt a moment of compassion for myself. For in that moment someone or rather, something else was willing to lend me their hand. As I reached out with my frail limb against my burdensome agony. I felt the heat in the darkness rise, I began to hear many voices.

It felt as if a crowd had gathered to watch and spoke in hush tones as not to disturb. As if waiting for the climax of story but are all to eager for the end. As these voices built, I became disturbed in the image of my pathetic state.

I was cold, and the heat of the darkness was comforting my lonely heart. The more I became disturbed in myself, the louder the voices became. In my hysteria of emotional delusion, I let out a scream of derangement, a scream as if I my skin was being peeled from my body.

My hand, shaking in the pitch of darkness, suddenly I felt something pierce my chest. Upon this feeling, an excruciating pain settled sharply in my heart. The voices that were once subtle, had now become voices of cheering and roaring.

They sounded as if they were mad dogs of famine being teased of sustenance. I could not move, but my hand remained inched into the darkness still. The pain only grew sharper and deeper with each breath I took. I tried to yell for help, but nothing could be done.

My throat was numb and my body frozen in its fragile state. Soon the whole me became a frigid stone of flesh, all that moved were my eyes. I could feel the space around me sizzle with heat. I could feel the hydration from my flesh slowly evaporate.

I could see clouds of steam rise like dew from the morning sun. I was helpless, bound to whatever  pierced me. I began to consume the image of myself once again. I bellowed in the belly of my chest as I was paralyzed by something I cannot explain. A force beyond that which I know.

I became hysterical in my head, my life ripped from limb to limb, severed from the hope of my heart. I became nothing but bone as I fell deeper into this darkness. Soon there was no comfort, no compassion. My resentment rose beyond boil, it became fire.

It burned the flesh from my bones and as it did, the voices around me raged with delight. I started to become familiar of these snarling voices. Most were of those who toiled me with illness in my growing years. Spitting on me in passing, curling their tongues with vulgar aggression toward me for their twisted amusement.

I was at my end, the voices grew more mad than I. My eyes melted and my flesh burned from me, all that remained is the dire death of my life. My hand still pleading to he, to the chaos, to the demon to take me. As I laid there with surmountable pain, I could feel I had no lips, still no voice, and felt no heart.

If I could smile, I would have, for I felt free, free from all things that burdened me. I had reached what I was in search for. Something to understand me and now I see, I see what vile wealth I and others had brought. Now, I am a shadow of what must be done and in my brilliant moment of my dark mournful epiphany, sight came too me.

Though I had no eyes, I could see in the darkness, I could see my frail self lying hopelessly on the ground. I was covered in tears, scars, and anguish. As this sight held to me, as I looked upon my body, I saw what dealt me the piercing blow through my chest.

The demon, he stood atop my lonely flesh with a spear through my heart, a smile upon his face and thirst flowing from his mouth and behind my body, stands an army of he, all faces of those I know. But of crimson flesh, hollow eyes, horns of hell, and all quenching for a taste my soul.

As this sight became more sickly and vivid of chaos, I became frightfully sickened. I was horrified, but I felt no call for escape. Something had gripped me and now I cry with a silent voice as I follow these demons down a horrid path of putrid tasks and meaningless hunger.

Quickly was my wish to smile stricken from my face and I found myself wishing for the former. These demons know not of what I wish, for I cannot speak. They, too hollow in the heart to hear, but I pray and seek for an escape of this nightmare of my head.
------
It is easy to get swept into darkness, into the things that bring us suffering.

Explore more such stories and thoughts in, A Man's Traveled Heart
Coming soon, The Bleeding of Words