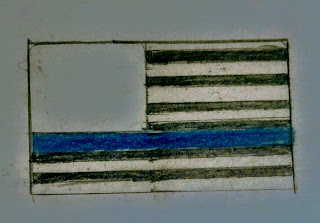 It was a another day, another morning; a routine. But today, of all days, on the day of his daughters ninth birthday everything changed. Where there was light, darkness swelled. Where smiles leaped, tears fell.

Where the sun rose, death reared its head. Peering over the hearts of this loving family. Darkness grinned with jubilation where light wept with grief. The unwanted voice of tragedy struck and hell became the home in which this family lived.

On the morning of September 1, 2001, at 3:45 am, before most wake and before the streets flood with aluminum cages concealing their masters; an officer, by the name of Peter Gell was tragically murdered.

He had pulled over a vehicle that had been driven by at an excessive speed, thirty over the limit. Its windows too tinted to see inside. Officer Gell, had been a police officer for nearly twelve years. After serving four years in the military.

He had a wife and daughter, Katie and Julie. His marriage was only seven years young before his death. Officer Gell was always respectful, even to those that were in the wrong. He always did his best to keep the perception of criminals out his head. He never wanted any assumption to lead him to any wrong decision nor act in such a manner that would lead to an altercation.

Some would say that is what led to his death that day. His unwavering position to remain as a person, over a blue book slamming officer. He knew life was difficult for many, most in the area he patrolled, most chose a dead end path, literally.

Most either sold drugs, were thieves, or murderers. All looking for a quick buck or a way to establish themselves so they wouldn't become victims of abuse by the streets. But more often then not, this thin logic of thought, meant a grave before the age of thirty.

Unfortunately, that was the age of Officer Gell. He had turned thirty just three weeks before his death. He never expected what would happen to him, would happen on his daughters birthday. He was only a couple hours from relief of duty for the day.

Sitting in his undercover black Crown Vic, a vehicle flew by him, he flipped on his light and sped to pull over the suspect. Catching up to the driver and the vehicle, he pulled the driver over by an old abandoned warehouse.

The driver drove an old 1980's black Cadillac with gold rims and music blaring. Officer Gell, while still inside his vehicle said his usual prayer for his family and friends before exiting his vehicle. Exiting his vehicle, he approached with caution, his hand gently settled on his weapon.

The driver at first was hesitant. He showed signs that he was nervous. His hands were shaking and he lacked any eye contact. But officer Gell knew such reactions can be normal, even when someone is merely pulled over for a simple traffic infraction.

It was a cold morning, both Officer Gell and the driver's breath were rising to the silent and empty streets. Receiving the drivers license and registrations officer Gell made his way back to his vehicle. Once back at his vehicle he ran the license and plate of the car through the system.

Nothing came up, the driver was a seventeen year old kid. Officer Gell found it strange though that he owned such a vehicle. Most kids his age around this area own a beat up Honda civic. The Cadillac was in mint condition, no oddities appeared upon the vehicle and it appeared to have a new paint job.

Officer Gell then stepped out from his vehicle, approached the Cadillac again and asked the driver a few more questions and then returned the license and registration back to the driver. Officer Gell gave him a warning and told him to have a nice day.

On his way back to his vehicle, just as he was passing the rear of the Cadillac, he saw the trunk pop open. At first he thought it was nothing, then a few more paces and he heard a sound no officer wishes to hear.

He heard the cocking of a pistol. Officer Gell reacted as quickly as he could, fog had just rolled in. It curled its way into the trunk of the car as it opened. The driver rolled up both the windows, but as he did, Officer Gell heard the words,

"We run these streets!" Shouted from the drivers mouth.

Officer Gell reached for his pistol, rain started to fall, but it was too late. He could not retrieve his weapon fully. He was hit with three rounds of forty five to the chest. Which knocked him to the ground. The shooter then stepped from the trunk of the car.

His eyes were flooded with rage, the thirst for blood. Officer Gell, knocked to the ground, wounded, called on his radio, but was shot in the head before being able to complete his call. The shooter then unloaded the rest of his rounds into Officer Gell's chest. The shooter then tossed the pistol into a near by sewage drain, hopped into the car and sped off with the driver.

The streets then became pierced by silence, except for the now thunderous sky.

Officer Gell, laying motionless on the ground, had said enough over the radio for dispatch to try and reach him. After no response, six minutes later, the other officers on duty and an ambulance arrived. It was too late though, officer Gell was dead, killed the moment he was shot in the head.

That day, tragedy struck, not only in his life, but the entire world. Thousands were killed and among those killed in one of the most tragic events in history, officer Gell was one of them. Though not connected to the other event, he is still part of the endless slaughter of innocent lives that try to live well and be well to others.

Let us not forget those that treat us well, that protect us daily, and those that are stricken from this world out of pure hate. Let us bear responsibility for our actions and the choices we make, so that we may not end up the murderer of ourselves or another. Be it a mental or physical massacre.
------
(This is not a true event)

Thank you for reading, I hope this brought some thought to your mind and heart upon reading it.

What do you do for those around you, are you making the choices that will give you the life you want or end it before it ever begins?

Like reaching into your heart? A Man's Traveled Heart
Coming soon, The Bleeding of Words.