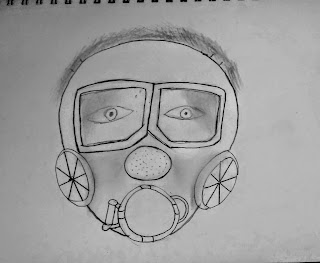 It has been sixty-three days and I have seen not a single living soul. The country has become desolate, bodies lay like scattered piles of trash. The rotting stench of flesh smears the air, it's difficult to breathe. I have yet to get used to the smell, or maybe, I am used to it but refuse to let it go.

What ever the consequence of the smell may be, the air is not only rotten, but harsh. You must wear something over your face in order to obtain even a fraction of filtered air. If not, your lungs feel as if they are on fire. No one knows the cause of this massacre, not even the origin at which it started.

Everything seemed normal, then one day, everything turned to chaos. After twenty-four hours the country was in mass hysteria. People were dropping dead, children were alone on the streets. Many watched as their parents suffered horrific deaths, at the hand of what ever caused this.

Children appear to be more resistant to it than adults to whatever this hell is killing us. How ever, I survived and why, I do not know? The short stint mass pandemonium the country was in, no doctors, scientists, or any researchers of the medical world could figure out what this thing was.

Was it transmitted by air, touch, water, food, or insects? Nobody could figure it out. So for about twenty for hours nothing but murderous screams, fear, and tears swelled from the country. Eventually, the country went silent. Nothing, no one was left, at least, that's what it seems up to this point.

I have yet to cross any living being, even animals are absent from what I have seen. Few plants have survived. Any food that wasn't either frozen or vacuum sealed or in a can became spoiled. I guess, lucky for me, I survived and now I have almost endless food. But I have become disheartened and am becoming lonely in such a place.

It becomes unnerving when you are the only one left. You have no one to draw conversation from. You start to feel irrelevant to the world around you. You slowly drift to instinct, doing what ever you can to stay alive.

I mean, so far, it doesn't take much to do that, other than go into a grocery store and find packaged food. But, it becomes difficult when you start to lose your mind, or at least that's how I am starting to feel. I am constantly talking with myself, trying to figure out if what I am doing is wrong?

Is taking from the store the right thing to do? Is it okay to use what ever car that I see? What do I do when I see someone else, do I approach them with caution or embrace them immediatley? I can feel my mind becoming irrational.

Though I am becoming something other than myself, I hope I am wrong about this. But I have no one or anything to keep my heart fresh and my mind working within relationship of each other. I can feel myself already growing distant in the world that used to be.

It's twelve in the afternoon now, day sixty-three, the sun is high, the temperature, mild. The streets are bare of anyone, except the rotting remains of those who used to be somebody. I, wandering through the country hoping to find some one, in hopes they won't be some mad creature that you see in many movies with scenarios like this.

As long as I am alive I will keep searching and keep traveling. Living in as much hope as I can till my mind becomes but a obscure existence of what a human is to be. The next town is about hundred miles away. My car is running out of fuel, wait, what is that?

I pull over, I saw something moving in the distance. I get out to use my binoculars, I scan the horizon, I see.....a person, they look to be running, running this way, very frantically, but why?

I get back in my car and start to drive toward them, they see me and start to wave at me. I get closer, I notice the wave they are giving me is to turn around. But foolishly I ignore it and I drive up to them as fast as I can.

They are yelling at me as I drive up to them. I stop in front of them and roll down the window. His breaths are short and frantic, his eyes dilated with fear. He places his hands on the door of the car.

I look to him with curiosity and a now racing pulse. "What do you mean, who will see me?"

He then turns away from me and says nothing else. He starts to run off, just as he does, I hear the sound of a gun shot. He drops and for a moment I am stunned, unsure of what just happened. As soon as it registers in my head. I put the car in reverse, but as I do, something shatters my windshield. I feel something hit my chest.

I look down with confusion, there, just below my heart is a dart. About the length of rifle round. I suddenly become woozy and pull the dart from my chest. As I look at it, my vision becomes blurry, my heart starts to slow down.

What I think is a few minutes later, I come to, but only for a moment. When I do, I look to my left and I see two men in white chemical suits and masks carrying the frantic guy toward where he was running from. Then I suddenly hear muffled voices and a shadowed figure approach my side.

"We got another resistor, there are more than I expected."
---
Thank you for reading, what do you think is going on in this characters story?

More of my words to be sponged up in, A Man's Traveled Heart

Hope you enjoy my writing! Thank you for you support.