He struck up a match and lit the candle that sat upon his desk. Upon the candles embrace of the flame he blew out the match and watched the smoke fade. His face shifted in the dancing light, one might say it skewed the truth. 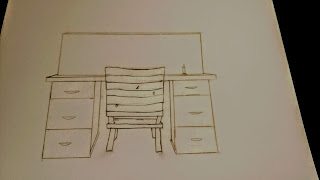 He then looked around his small cottage and began to check the doors and windows; ensuring they are sealed shut. His walk is slightly subdued by his lame leg. Injured from an harrowing event; but he dares speak of it. He prefers the ever echoing silence of the memory. Never giving more than a glimpse to others to ignore his disabled leg. After checking his very limited perimeter he walks over to his fire place.

He leans over a small pile of logs as he adjusts his leg to adhere to his desired posture. He then grabs a log in one hand and chucks it into the middle of the fire place. He then reaches for another and another, he then alters their position. Allowing them to be more feasible to the igniting of flames.

Once the logs are set he reaches into his flannel breast pocket and pulls out a flint lighter and places some kindling under the stacked wood. He then reaches into the fire place and sparks the flint near the kindling. A few good strikes and the kindling ignites.

He watches with keen eyes to ensure the fire will care for itself. A few moments pass and the flames appear healthy. He turns away from the fire and makes his way to his desk. He pulls out an old oak chair from the desk and with no preparation; he drops himself onto the chair.

Once in the chair he places the flint back in his pocket and readjusts himself. He grabs his leg and swings it to the front of the chair. He then pulls himself up against the desk and carefully examines the contents upon it.

Upon the desk lays a journal, a pencil, nearing its demise, and a short glass of bourbon. He takes his right hand and picks up the pencil, his hand shakes slightly as he grips the pencil and holds it an inch from the journal.

He then slowly brings the pencil to the paper and as he does a few unpredictable scribbles mark it. He grumbles to himself as he tries to gain control of his hand. But it won't cease shaking and with a tone of resentment; he grunts and picks up the glass of bourbon with his left hand and takes a swig.

He then tries to write again, but his hand won't steady. But even in his frustration he forces the pencil to the paper and begins to write. Though his hand writing is almost illegible he finds no reason to stop. A handful words come out clearly though, "suffering, alone, regret, sadness, and hope"

He takes another swig of bourbon and as he does, a sudden strong dull pain sparks in his heart. His breath becomes restrained, he falls back in his chair; and as he falls he frantically reaches out into the air. In doing so, his hand catches a drawer in the desk and pulls it from its hold; it falls beside him.

He ceases to move and his eyes struggle to stay open. The light of the candle shifts what little shadows remain in the cottage. His lungs refrain from the consumption of oxygen. Everything becomes a silent pit of death, and in the drawer that fell beside him; is a pile of unopened letters with his name on the return address and upon them as well, is a repeated recipients address.
----
Thank you for reading hopefully you enjoyed this as much as I did.

What pain do you hide inside? Do you think there are some stories of pain that should remain closed?

More of such stories to be found in, A Man's Traveled Heart
Coming soon,  The Bleeding of Words.