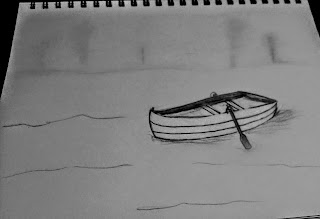 The water is as still as ice and gleams with a pearl blue as quiet ripples orchestrate off the small boat. Both passengers, Edgar and Rye look to each other for reassurance. They have been traveling for three months, over coming treacherous storms, facing monstrous beasts, and thwarting the illusionists of magic.

They are exhausted beyond belief, they have very little rations and are running low on water as well. They look toward the path of their boat, but dense fog hugs the brisk air. Looking out into the unpredictable path, Edgar places down his paddle and moves behind Rye and reaches into his bag and pulls out a small old brass telescope. He expands it and places it to his right eye. Rye picks up the other paddle and continues to stroke.

An eerie silence fills the air, all that can be heard is the paddles splashing against the water. As they slowly coast through the still enchantment, a sudden look of surprise spreads across Edgar's face. He removes the telescope from his eye and with his awkward smile he taps Rye on the shoulder and tells him to take a look.

Rye drops the paddles and allows them to settle. He eagerly grabs the Telescope from Edgar and stands up but with a forcing of balance. Once he catches himself he scrunches his nose and presses his glasses to his face. He then places the telescope to his eye and looks to where Edgar is pointing.

For a moment he sees nothing. Then, as he leans a little forward he sees something. Something that appears to be the shape of a tree. Edgar expresses his excitement with a wild spin and asks Rye if he can see it. Rye removes the telescope and turns to Edgar with a large grin and says yes.

They both grasps each others shoulders, face to face, and howl into the air. After the short ruckus of celebration they sit back down in the boat and start to paddle. Their hearts acute with joy they bring the boat to its max speed.

Rye calls out that he thinks they are moving faster than they were before. Edgar, looking through the telescope responds to Rye with frustration. "We aren't any closer and are you saying I wasn't paddling fast enough?!" he clenches his left fist and places the telescope into his right pocket.

Rye, still padding and keeping his head forward, "No, I'm just saying I think we are just moving faster."

Edgar, still with his fist clenched, " How are we not there, we've been paddling for hours I swear, ( he grabs Rye's shoulder and shoves him out the way), let me paddle."

Rye, pressed against the edge of the boat looks to Edgar with slight animosity and moves out of the way. "It's not me Edgar, I think whatever we are seeing is moving further away."

Edgar ignores Rye and starts to paddle, his face brewing in anger he keeps his eyes to the front. Rye then moves to the back of the boat and sees the telescope inching its way from Edgar's pocket. Rye catches it just as it falls out. He expands it and looks to the horizon.

Still, through the dense fog he sees the same silhouette from before, and it is no closer. Rye then becomes frustrated as well. He places the telescope in his pocket and tries to take one of the paddles from Edgar. But Edgar resists, "Let me help Edgar, come on!"

Edgar shrugs away from Rye, Rye then becomes furious toward Edgar, "Fine, I'll throw your stupid telescope into the water then." Rye pulls the telescope from his pocket and mimics the action of throwing it.

Edgar quickly drops the paddles and turns around, "No you won't!"

Rye with a snide smile pretends to throw it, Edgar instantly leaps and tackles Rye. Tackling Rye they are both flung into the water. As they are flung into the air the boat is shoved from Edgar's foot in action of tackling Rye. Just as they hit the water, a loud scraping emerges from beneath the water. Like wood against stone, for a moment they bicker and fight among each other.

Then, Rye starts yelling at Edgar to stop as he holds the telescope in his hand above his head. Edgar flails some more at Rye and then ceases his antics.

He then sees Rye pointing toward the boat, it is slowly floating away. They look at each other with confused looks, Edgar then looks to the area the boat was, and there, just where the boat was. Is a giant stone sticking up beneath the water, hidden just enough for them not to have seen it.
------
Really had fun writing this one, it was inspired by the painting, Isle of the Dead.

What is your favorite part of the story and why?
Please let me know, would love to hear your thoughts!

Find more of my writings in, A Man's Traveled Heart
Coming soon, The Bleeding of Words

Thank you for your continued support! Please feel free to reach out to me any time.