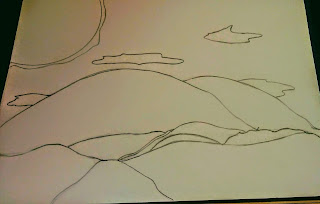 The deserted path is always my favorite. It's a path few in my town are willing to walk. It is far from the nearest common road and is bound between two large hills, that most would grow tired after the hike up.

Yes, the view from the hills is outstanding, its almost a mythical view. The kind you read from a book and wish you could see such a thing. But even with the amazing panorama of beauty from atop the hills. There was something that drew me to explore what lay between them.

I was about sixteen when I took my first adventure down between the hills. My mother rarely let me even go to the top of the hill as a young boy. The hill on our side was the tallest of the two, if I was ever to go up, with my mothers consent that is, it would have to be bright and early, just as the sun was rising.

That way, the journey back, I would be home in time for lunch. Growing up I had always been one to seek adventure and explore the enchanted world around us. Very few felt the same in my town, there was only about four hundred of us. Only about twenty of them were my age, which made it difficult to find a friend that suited my style.

When I did, it wasn't long until their parents had ridden me from their child's life. I wasn't a trouble maker if that's what you are thinking. I merely enjoy the spectacle of danger and exploration. Climbing the tallest tree, riding the river down on a hand made raft and much more.

So, it wasn't long till all parents of the village found me to be quite the worry. Eventually it was just me and my constant imagination that I conversed with. Which oddly, I was fine with, there has always been something soothing about being alone. Especially with my kind of mind, most can't seem to keep up with it. They prefer the comfort of the walls rather than the limitless voyage of the world.

Why I bring This up, is because there was a day I read a book about an explorer. One who isn't very famous, but he had been on a path way hidden in the cascades of Sierra Nevada in Colombia. Like me, he was one for traveling alone, he was happier that way. But on his travel through the Colombian Cascades, he found a path that veered off from all the rest.

One that appeared no one had taken. It was steep and lead about a thousand feet down on a very narrow path. In the book he wrote about how most of it, you had to have your back against the mountain and do your best not to look down. The trick he used to keep from looking down and falling was staring into the horizon, it happened to be at the moment the sun was rising.

So he kept his focus on the wonders of the sunrise. If I remember correctly, he explained it to look and feel as if heaven were opening its gates. He was so astonished by it, that even when the sun was past its magical horizon, it bounced off the clouds and vivid hues caressed the skyline, he was breathless to it. If you read the book it would take your breath away, he does a much better description than myself.

So, eventually he made it down to the bottom of the path. Reaching the bottom, he heard music playing and singing. So with his adventurous soul, he ventured toward it. Through some jungle he ended up stumbling upon a small town, much like mine.

Beautiful flowers laced the path just at the end of the jungle brush that led him to the town. A river ran along side the village all the way down the mountain. Following the path and arriving at the village, the people saw him. At first they were stricken in fright, but they saw upon his face a smile, a smile that was led by eyes of excitement and gratitude. He was amazed by what he was seeing.

A town, no larger than mine or his, surrounded by mountains, far from everything else, touched by no others but the towns people themselves. He said it was unlike anything else he had seen or felt. He was bewildered by what he was seeing and the people welcomed him with open arms. After a few weeks there, he met a woman, they became great friends and over time they fell in love.

Much so, that they married, left the village and ventured all through the world. But no one knows where they ended up. He wrote his book and sent it by boat to a publisher who was a friend of his. So no one knows if they are is still alive.

At sixteen, I ventured down between the hills and found the hidden path. It wasn't as beautiful as the one in the book and there was no secret town. But it was still beautiful in itself and it was my path. One no one else had taken.

So, on my yearly visits home, when I look from atop the hills and down to the hidden reaches of what lay between them. I wonder if I will find such a glorious scene and a love so strong I am willing to adventure with someone for the rest of my life.

And though down in the reaches of the hills, there holds nothing more than trees that bear leaves of sun-kiss orange, scarlet-red, and lemon. It holds something only I can hold, and what that is, is something I cannot explain. But it was the first step, to living my life in the glory that I wish it to be.
------
What pulls you into this story?
Are there adventures you have yet to take that you keep putting off?