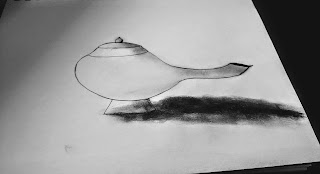 
A circle of graves stand near an old home. No one dares approach it for the tale of a witch is told to occupy its walls. Even the nearest road is a mile from it, not a single home is its neighbor. But tonight is an usual night, for tonight; a group of kids become curious. Well, not curious, more in thought of foolish bravery seasoned in the words of a dare.

So, of the five, three go into the woods to find the hold house by the graves. As they travel through the dense woods at midnight, they speak softly between each other. Doing their best to display no fear, but each can hear their heart beating fiercely.

Every branch that breaks beneath their feet they are consumed with fright. Startled, they cling to one another but quickly separate in an act with false bravery. The deeper they recede into the woods, the more ominous everything becomes.

They can hear critters scampering between the trees with each step they take. Suddenly, the moonlight vanishes, it has been concealed by the thick canopy of the forest. Upon this eerie scene, one of the kids can take it no more, and they return back to the other group that stayed behind. Now only two push into the woods with dreadfully beating hearts.

Only silhouettes of themselves can be seen. But they press on though they shake inside with shivering fear. Further they breach the woods and suddenly one takes a step, trips over a log and screams with fright. The other jolts back and presses themselves up against a tree.

With no warning hundred of shrieks came falling from a above. "Bats!" screams the kid against the tree. The other one flailing in fear quickly stands up and runs back to the other group. Now only one kid remains alone in the woods. They take in a heavy breath and compose themselves the best they can against the ghostly and mysterious fear that hugs the night air.

They walk for a few more yards and off in the distance between two crooked trees is a light. A flickering light that illuminates the shape of a house. Upon seeing the light the kids eyes light up and his heart feels a slight touch of relief. But just as their heart is slowing to a comfortable pace, a wolf howls in the distance.

Instantly the kids heart is brushed by fear. They clench their hat and pull it to their ears, as if to protect themselves from what creeps in the darkness. After the wolf's howl concludes, the air becomes cold, colder than what is was. The kid looks around in fright as their breath floods the darkness.

Just as they are about to turn around and run back. They stop, and begin think about what might be at the light.  Horrifying and magical thoughts whisper throughout their head. So, with one more heavy breath, they make their way further into the woods.

They reach the side of the house and just as they do, a voice speaks out, "What do you want child?"

Instantly the kid leaps from the side of the house and looks behind them. There, just a few feet from them is an old lady. Grey hair, a missing eye and a nose that could probably be used to suck blood from children.

The kid does nothing, they are motionless. The old women steps forward and grabs the kid by their arm and says, "Well, answer me, what do you want?"

The kid is in shock and his eyes are as wide as half dollars. The old lady then says, "Alright, no need to be frighten my dear, its much too cold to be out here."

She then guides the kid into the home. Once inside, the kids heart is strangely overcome with joy. The house is beautiful. It's lined with beautiful paintings, the floors are made of marble, candles hang from chandlers and light up the house with such magic.

Treasures, such as jewels, gold, gems, and rare stones billow from chests through out the house. The kid still remains silent as they watch the fire place.

Which is as big as a wall, crackling away and heating the house at just the right temperature.
The old lady sits the kid down at her table that stands center of the home. She then sits across from the child and asks them once again.

"What are you doing here child?"

The kid, with a quivering lip slowly responds.

The old women throws her head back and laughs. She then stops and looks into the kids eyes.

"Well child, today is your lucky day. For generations no one has visited me, for a terrible story was conjured up by the old king that once lived here. He told the world I was a witch, even though I was his queen. But I was no ordinary queen, for I am genie.

But I never told him, for I did not want him to use me for my wishes. But he became greedy and tried to force wishes from me. But as his wife, I am forbidden from giving him wishes. If I did, I would have been quickly taken ill by death. I even told him the consequence, but he ignored me. So he tried to divorce me, but I would not agree. I loved them man dearly, he even tried to have me kidnapped and enslaved till I would divorce him. So, I cast him to forever be trapped in another world. And you know what that world be my dear?"

The kid shakes their head no.

The old woman squints her eyes and points to a window in the home. Outside the window is the circle of graves and as she points, she says,

"I put him in the world of the damned."

The kids eyes grow with a fearful surprise for they thought that was what their outcome would be. But just as the kid grew with fear, the old woman touches the kids hand gently and says,

"In the end, I regret nothing, my husband became a greedy man and because of my curse upon him; the kingdom rose up against me and banished me here. Where a witch cursed me of my looks and forever to be imprisoned, the witch thought it only fitting for me to be trapped where I convicted my husband."

The old lady then goes silent, a tear falls from her eye, the kid sees she is sad and says,

"Don't cry, your husband was bad and you did what you could."

"Child, because of your kindness and bravery to come here, if you visit me once a week, alone and from the purity of your heart. I shall give you a new piece of treasure for each visit. But you must promise to never become greedy......(points to the kid and shakes her finger at him)...deal?"

The kid looks around the room with a giant smile upon their face and shakes their head excitedly and says yes. The old woman smiles back, and as she smiles, the kid is suddenly at the edge of the woods next to the road.
---

Hope this was a magical read for you!

What message to do you get from this story, please let me know? I would love to hear your thoughts.

More magic to be found in, A Man's Traveled Heart
Coming soon, The Bleeding of Words