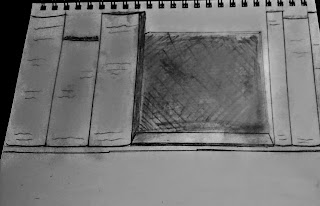 A black rose encased in glass sits idle upon a top shelf. It's gently placed between two black books. The rose case is covered in dust looking to only take up space than give any, all pass by such a spot in the library, keeping keen to what they came for.

But on one drizzly afternoon in the quaint town of La Conner a girl in her second year of college. On break from another year of uninspiring classes and endless rhetoric of bland and deceitful philosophy, she wanted to drown her mind into something imaginative and breath taking. She wanted to find her self a story that could bleed her into a world of wonders, mystery, and hope.

She was looking for a book that could lead her to such a place. So, upon her second day back, she decided to go to the only bookstore/library in town. Very few went to the library, seeing as most the kids that do live here, are either still away in college or have moved out of town.

Those still living her, are mostly retired people who tend to travel a lot. Her parents were out traveling Europe, returning within the next seven days. Depending on if they were up for another round of site seeing.

So, the girl, alone in her adventure to seek out a story of escape made her way to the library. On her way their she walked with a whimsical smile as she enjoyed the nostalgic feel of the town she grew up in. It had been two years since she had been home.

Nothing has changed, not even the old antique shop that no one ever visits. The owner, Gerald, could always be seen sitting at the front counter reading the paper during business hours. A nice man, but he kept to himself. Passing the shop she looked over and saw Gerald sitting their with his glasses hanging at the edge of his nose with his eyes to the paper.

After passing she arrived at the library only a few minutes later. Before she entered, she looked over the old building, it still has the fading word, Library, acrossed it made of brass. The windows slightly tinted to keep the light out. As to bring a more romanticism to reading.

The girl then opened the doors to the library and walked in. She was instantly taken in by the smell of books and that odd smell of sour apples that never seemed to go away. The same lady that originally opened the library still runs it.

She saw the girl enter and instantly recognized her. She ran up, or rather sauntered over with a great big smile and hugged the girl. The girl embraced her back and said

"Mrs. Constent, how are you, its been forever it feels like? I see you still keep this place in order, minus the library sign! (She laughs softly)

Mrs. Constent, excitably presses back from the girl and looks her over. Her gray hair styled like the fifties, she wears a one piece loose fitted grey cotton dress with a small white linen coat. She smiles once more at the girl and says

"Oh my dear Nellie, yes, books are something very few understand their value and power, if put into the right hands and used properly that is. And for the sign, I see no need, no one these days seeks out a library anymore, except you. (She smiles and steps back.) Now what are you looking for?

Upon Misses. Consent response, Nellie explores the library with her eyes and taps her chin with her index finger.

Mrs. Constent raises her brows and smiles, she then turns away from the girls and says

"I have just the story for you, go to row seven hundred and go all the way to the back. You'll find what you are looking for there."

The girl then makes her way down the row and to the far back. Reaching the end of the row and the back of the library, she sees hundreds of books crammed together. But none of the books have titles, she starts to look around, but she becomes confused as to why Mrs. Constent would have her look here, there is nothing of apparent use.

Just as she is about to turn away and seek Mrs. Constent, and ask what she should be looking for. She looks up at the highest shelf which is pressed up against the library wall, and sees something odd. Something that is not a book, but the shape of box placed between the books. She can't reach it so she looks for a step ladder, just behind her, leaned up against the side of the shelves of row seven-hundred, is a small step ladder.

She grabs it, unfolds it and steps upon it. Reaching the last step, she reaches up and dusts off what ever is covered beneath the grime. As she waves her fingers across the box shaped item, cobwebs and dust fall from the two books that pinch the mysterious item.

She then sees a few letters appear from beneath the dust and she brushes what is left. As she finishes dusting, she sees the Black Rose inside the glass case and the titles of the two books that surround it. She then looks to her right as she reaches for the rose and calls for Mrs. Constent, but as Nellie touches the glasses case the lights suddenly go out.

She falls back and the two books that on either side of the rose fall, along with the rose. The girl lets out a short and startled scream as she hits the floor. She hears the books fall and the glass case hit the ground.

She instantly hears the case of the rose shatter. She stands up quickly and looks down. The black rose, lays in a small pile of shattered glass. She doesn't know what to do, so she grabs the two books and put them back up on the shelf.

She then hurry's to pick up the rose. But as she picks it up, she feels something prick her finger, she drops the rose, she looks to her finger, a spot of blood dangles from it. She places the finger in her mouth and sucks up the blood. As she does this she looks to the rose.

She goes to pick it up again, but it shrivels up and disappears. A cold chill of wind then flutters through the air. Goose bumps form upon her skin, an ominous whisper then echoes through the library.

----
Thank you for reading, do you want this story to continue on? What do you think will happen next?