The Splitting of Earth 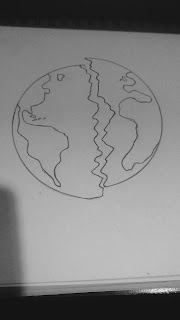 The Splitting of Earth

The horn of the heavens rang out with a mighty bellow. The earth began to shake, every mouth of fire spewed with rage. The gods stared with bereavement of what must be done. Horror stood with a frothing mouth of carnage. The earth began to split into two, screams of suffering clouded the air.

Mountain tops crumbled at the sight of the heavens. Devouring everything in their path; no creature nor village was left in safe passage. The ground began to boil, flesh became victims of shrilling heat. Mothers watched as daughters became ravaged by flames; as deafening screams of torment resounded in the ears of the mothers. Fathers observed with grieving souls as sons were crushed by falling stone.

No soul was safe; the heavens rumbled with mighty roars. The sky opened with a blinding light, Angels came rushing from the stars. Gods came charging like eagles as clouds of white stormed the horizon; and as they rushed down to the splitting earth, up came the snarling black smoke of the demons. Sharp teeth clattered like stampedes of wild beasts. Thick clouds of black smoke rose from the cooling spit of the volcanoes.

Dragons surged from the crumbled mountains. Demons rose from the black smoke, devils danced as they became free from the splitting of the earth. Deep drums shook from hills tops as warriors of heaven and hell advanced to battle.

As chaos erupted, the people of the world were silenced by death. All that remained were the beings of the spiritual; coming to claim the flaws of humans. Angels and demons fought with ferocious contempt.

Gods and devils that stood to the height of the clouds clashed with great fury. The earth became a screaming war of the heavens and hell. Dragons flew with wings as wide as valleys, eyes as black as the breath of death. Scorching the earth of any remains.

The world for seven days was a massacre. A slaughter that ended it all. The stars fell, the moon flung into the sun, the planets collided and the universes became nothing but a blank canvass.

Blood poured into rivers, tears drenched the trees and hell consumed it all with gluttony to murder in the desire of sin.
-----
Thank you for reading, I hope you really enjoyed this one. Had a lot of fun writing it.

How do you think the world will end?

More of my stories to be read in, A Man's Traveled Heart
Coming October 2018, The Bleeding of Words