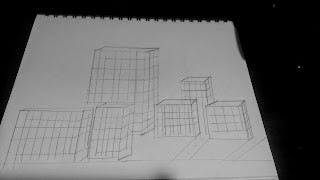 The sun gleams against the busy horizon of the city heights. Thousands bustle between the individual goal of now. Gathering thoughts of conversation to the sinking whims of the mind. Flowing with the concrete streams and broken seams.

So many, yet so distant; a world pressed tightly in a plexus of man. Creating a pliant mind as flesh is the desire. Looking for that nepenthe escape; dull the sense of agony. Placing hearts on material and material on spirit.

A wafting stench of empty souls walk with jaws hung open. Exhaling with vaped response of its temple. Longing for the existential of more than late night smiles and tasteful drinks. But competition of the vain; grips with an ingenious web in the city lights and crowded streets.

Perplexing the eyes with the mesmerizing style of wealth. Capturing the young in the excitement of halogen strands of reds and pinks. Caressing the naive skin of youth in temptation of lust.

All things of man flood with irreverent need to be subtle. For nothing of addiction is consumed in the ethics of good character. Free, many may feel in the under glow of downtown antics. Priding self in the accomplishment of murdering the body in a slow poisoning in the consumption of heavy spirits.

Only to wake in an after taste of regret and the hollow draft of forgotten memories. Memories which were no brighter than what lies between the stars. But laughter was greatly embellished, and friends severe little in the mistakes of the stupor.

But no fault is to be blamed on neither the architect of these psychological obscurities of city breath.
Nor the ignorant minds of the young, but rather; the lack of ones own undertaking of the soul.
----
Thank you for reading, do you enjoy the city life or prefer the distant disconnect from it?

More stories can be found like this through out the week, micahbiffle.com
Or in, A Man's Traveled Heart
Coming soon, The Bleeding of Words