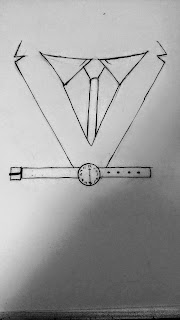 The music deepens, the voices sing with intriguing muse. He stands with a mighty rage as it gnarls at his chest to be free. His skin flushed in fury his fists ready for battle. His eyes deadened to the world that surrounds him. His breath shallow with intent. His mind wandering the possibilities at hand like the tinkering of a mathematician.

He buttons the last button on his shirt, pulls his tie taught and presses it smooth. He examines the threads of his attire. He turns slightly to his left, a small fiber peers from his charcoal jacket as if to taunt him. He pinches it and plucks it with resentful inclination. An examination of his clothes is taken up once more. Adjusting his tie one last time, he looks himself in the eyes.

No words are spoken, but he postures himself with confidence. Pressing his chest outward, his chin slightly tilted up, and his arms settled to his side. He takes in a heavy breath and slowly releases it.

He turns away from his mirror and takes a few steps to his dresser from his right. He carefully approaches it. he places his left hand to the top drawer and precedes to open it. Inside is a box, no bigger than his fist. He reaches in, grabs the box and opens it.

There, inside the box is a watch cradled within. He tilts the box away from himself so that the underside of the lid is shown. Held in by tape is a picture of a young girl smiling. He pulls the picture from the box and flips the picture over. The back reads,

"For my loving dad, forever love and always yours"

A tear falls and after reading the picture, he reaches his right hand and grabs his charcoal jacket; he places it on. But not before gently placing the photo on his dresser. Placing his jacket on, he adjusts it and then places the photo inside his left suit pocket. He then reaches back into the drawer and pulls his black watch from the box.

He turns his wrist to face the floor and places the watch on. The band fits snugly upon his wrist, it mimics the color of his attire. He then turns toward the exit of his room. He makes his way down his stairs and walks into the kitchen.

There, on the kitchen counter is a white brief case. It clashes with the red and black interior of the home. He approaches it with refined and deliberate steps. Places both hands on either side and opens the briefcase. Inside he finds a white envelope, he opens it and removes a photo.

A photo of the same girl. He flips the photo over, it reads,

"Daddy, don't go, not yet. Forever love and always yours."

He places the photo back inside the briefcase and closes it. He suddenly covers his mouth and a few harsh coughs escape his throat. He falls onto one knee and holds himself to the counter. He removes his hand from his mouth and finds it is covered in blood. He feels a warm sensation come from his nose. He touches it, blood is seeping from his nose. Worry overwhelms him, everything begins to blur.

Unfamiliar voices are whispering his name. The voices slowly increase and an odd sound of energy builds. A shock erupts into his chest, he yells in agony. With no warning, darkness constricts his visions and a flash of light appears.

Abruptly he awakes, more unfamiliar voices whisper. But he hears a familiar one in the mixture.
He buttons the last button on his shirt and pulls his tie taught.
-----
Thank you for reading, what does this story seem to tell you?
Let me know!

Looking for a book that holds stories similar to this? Look no further, A Man's Traveled Heart