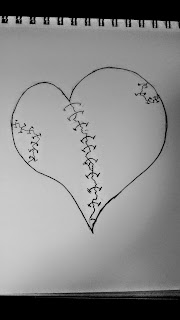 He takes the needle stitching pieces like madness. Suiting his desire to be a shadow of himself. His lack of esteem has driven him to the far woods past the Willow Ravine. Where no dare to step, for evil sleeps among the rotting trees.

His eyes as pitch as the darkness that dwells in the woods. He speaks among himself as if he is not alone. His home is but a vacant shelter made of stone; the former residence to the one whom was never known. Its now brittle architecture stands like crooked spoiled teeth. Eroding with each passing wind.

His heart anxious, pulsating like a symphony of wild violins, strumming as if disaster hangs at his neck. His skin, a pasty ivory, for sun no longer settles upon his flesh. He paces his mind with horrific tendencies as he strings himself a desperate shell of his departed self. His grotesque need to tether the limbs of what he is not; only voids his appetite to be.

It swells his craving to be a fabrication; a hoax. He is voracious to design a convoluted spine. A slithering existence to fit in between the cracks and the lines. Constructing the ability to be of everything, of anything. But he is bewildered in his own displacement.

Always wandering the halls in late night, conjuring the next stitch, the next limb. Frothing for liberation of his being. His own breath's feel of bleakness, he sees no self in the reflection of his mirrors. But a corpse withering to the wishes of coping in his misery and tears.

Hardening his own thoughts but with the gluttony of hoarding. Stacking delusions of deceit at every door that greets. Evading in dread of discomfort, of pain. He bleeds by the hands of his own infliction of his suffering. Pouring a mask of thickened lies, bringing false comfort to the cavern of his chest; as if he already died.

He sings behind the curtains, but shrivels at their opening. His audience, a facade of lifeless limbs strung up in the corners of his head. Crying tears of crimson stone as howls of hell drag with drooling fangs. Consuming his screams like sweets upon a lustful tongue.

His madness; a saboteur, a composition of an insecure ego; falling to malnourished marrow.
----
Thank you for reading!

What is your take on this suspenseful story?