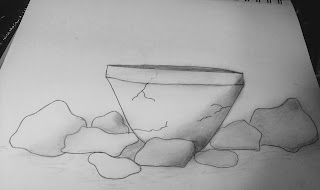 It's a gory scene to be at the bottom, where the rocks settle and the beast sleeps. Few come out alive, the viscous scent of misery spawns with every ripple that passes over. Creatures with eyes of ghostly red peer through the bleakness as they search in feast of the feeble.

Searching out malnourished minds and bitter hearts. Pumping deceitful thoughts as the pale skin of the wretched whom have fallen to the beasts scream. Shrieking in agony to strike fear in those who have newly fallen. Creating a toxic echo that corrodes those who carry dense doubt.

Worming their tongues in the ears of their victims as the beast gnaws upon their feet. Weakening their balance, creating a limbless critter to emulate its voice. It seeds into the mind of the terrified, blending with the suffering they posses.

They cry out but few fight back. They become hollow shells that suffice as a bowl for the beast to place its meal; and with each meal. The beast grows and the victim becomes a mere canvass of melancholy blue. Shuttering at the constant thoughts they seep from their own heads.

This bottom, where the rocks settle, is where none wish to be. For it can lean one in the tragedy of premature death. Bringing blade to flesh, ropes to necks, and brass to brains. It's a place of empty dreams and forsaken souls.

Its a garden weaved of the self-loathing. Slowly perpetuated by their sands of sadness with every breath they take. Cultivating reasons to be silent, to be a limbless critter of despair. But any whom have walked where the rocks settle; knows the hell that lives there.

They know the horrors that rest in the darkness salivating for the taste of life. Only to be hungry to ever passing time. Never satisfied in the dwellings of others. So they feast and feast with greed and anger. Living on the scraps of human minds, for they are only created by those who surrender themselves.

At first the anemic will plead, but will eventually fall victim to the spectral voice that whispers. Placing up their hands in a pathetic attempt to cease the beasts advancements. Crying with woeful tears in hopes that their weak deceleration of defense shall set them free.

But the beast cares not of their tragedy at hand. For the beast is but only thirsty, hungry, locked in the brain of the lizard. So they die in rapid success of their empty howls of defense. Many thinks these souls weak, wasteful, maybe so.

Though they fall, I know the madness that can drive one to wish the ending of the pain. But few see, that the beast is a reason to keep moving and find shore before it is too late.
------
Thank you for reading!

Do you think you have to hit rock bottom to truly change it all?

More words like these to be found in, A Man's Traveled Heart
The Bleeding of Words (Coming soon!)