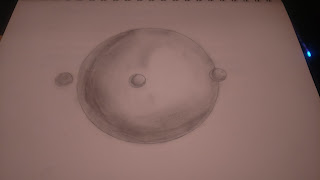 The stars were brighter than usual, the moon lay rested at its peak, glazed in a hue of turquoise blue. The oceans all across the world remained still. Not a single drop of rain was reported for twenty four hours. Birds were silent, their heads all looking in one direction, as if they knew what was about to happen. All the animals of world stood motionlessness.

It took five hours before the world started reporting on this strange phenomenon. Nothing could be explained, there was no visible threat that could be found. No real danger was brought to the attention of earth. At least not until "It" showed up, something of unimaginable intelligence and unworldly design.

It took only twenty for hours for it to hail chaos upon earth. Some how, though its size was that of a Pluto, it was able to bypass all radars and satellites. It landed fifty one miles just outside of Las Vegas. It created a crater large enough for Mount Rainier fit inside.

But there was no mass explosion and there was no clear presence of anything in the vicinity of the city for the first fifteen hours. They were able to create some sort of field that made "It" unseen. But in those twenty four hours, everything acted strangely.

The rare remaining phone booths that were active in the ghettos around the world were still of use as well. But it was only a matter of time before LAN lines became congested. It took only six hours for panic to set in, people started running around, there were people robbing and vandalizing businesses, cars, and any property they could get their hands on.

Everything was at a loss. The first twelve hours were a true blip of horror, of what humans are truly capable of when all of humanities spoiled advancements go awry. Only the most basic of things were capable of any use. But there was not enough to go around.

The streets were filled with tribalism to survive. Small groups quickly built barriers in the streets, gangs became ramped, the police were overwhelmed. Even some of the most wealthiest became victims to the unforeseen circumstance.

Much of the worlds wealth became useless, a small population had cash on hand. But even then, there were few uses for it; as most business had diverged from cash, only taking in electronic payment.

Food was not the first thing to become the theft of the desperate and chaotic. But the failed electronics that did not work. Many thought eventually it will all work again. Hoping that maybe they can strike it rich while becoming thieves under the shadow of chaos.

There was no hope for the state or the federal government to call forth the military for help. For the advancements they had adopted were all worthless within the first fifteen hours.

Then, upon the fifteenth hour, "It" appeared. A large black sphere, the size of Pluto. It sat floating in the air only a few hundred feet above the crater. Along side the sphere were smaller spheres slowly circling it. The sphere was admitting a low but noticeable tone. Almost the same sound one can make when sliding a wet finger across the rim of a wine glass.

Upon seeing it, there was no way to spread the news, except through radio. But even then, the radio would cut out every thirty seconds for about thirteen seconds. All the top and less acknowledged news stations reported the spheres presence.

As many as possible used old cars that still ran on fuel and had no control chip; made their way to the site. But with surprise, the government had already arrived from the near by military base on foot and using the few classic vehicles they had.

The area was quarantined off about three hundred yards from the site. Communication was the first priority of the military; as the news cast doubt and fear of the chaos that bled through the world. Very small amounts of people were actually trying to asses and help those around them.

Eighteen hours into the day, the sphere began to send out new sounds. Sounds that almost mimicked the waves of whales. But it was given in the pattern of mores code, it had been multiple generations since the last time that was ever used.

An old historian that lived in Las Vegas picked up on the signals in the first few minutes of hearing it on the radio. He quickly made his way to the site in his old nineteen-ninety-two Camaro. Upon his arrival he struggled at first to gain any entry to the site, but a Colonel in a near by Comms tent, heard one of the MP's trying to tell the old man to leave.

The Colonel approached him and asked him questions. The Colonel saw he had value for the situation at hand. They started to work out what the sphere was communicating immediately.
One hour in, and they found what they had been signaling out.

It was message warning the people of earth this is their last day and others are on their way and that . The military never released the message. Three more spheres showed up. One in Hong Kong, One in Egypt and one in Kenya. Twenty-one hours into the day, and the historian and the Colonel had been communicating with the sphere in Las Vegas for three hours.

Pleads to keep the human race alive seemed futile, and it was. They pleaded over and over about the billions they will kill and the those they will curtail from existence. The sphere laughed, as they explained we pleasure already in the murder of the non-existent. The sphere also stated we are burden on their living. That this earth brings provisions for their existence. And allowing the humans to remain will only cause unnecessary stress to their ways.

More negotiations were brought to the attention of the sphere. But there was no leniency, and upon the twenty-fourth hour; a quick flash appeared around the world and all went dark. The earth became covered in a sheet of shadowy clouds. Suddenly rain begin to pour down, but it was no ordinary rain. It was acidic rain, it melted through everything, killing all existence of man.

Those that remain, such as myself are hidden beneath the ground. Those that built shelters for the scare of the apocalypse survived. And I write this, in hopes that one day, the world will come to, and the history of this will be portrayed in the light it deserves. And that we shall not make the same mistakes we did.
----
Thank you for reading. I do not write much Sci-fi, its difficult for me to come with stories. But I hope you enjoyed it.

Was there anything you did or did not like in the story? What was your favorite ot least favorite part? Let me know in the comments below or let me know on any of my social media sites listed below.