Choking On The Repressed 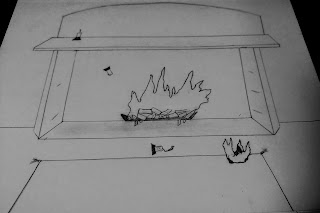 Choking On The Repressed

The door swings open, a ghastly wind rushes into the room. It takes hold his throat, he begins to choke; he struggles to his feet. Grasping at his throat his eyes strung wide he finds no passage to inhale. The candles lit upon his mantel fall.

They catch fire to his antique rug. Suddenly the windows that overlook the valley lift open. More wind fills the grim space. The flames rise higher with the rushing presence of air. He continues to stumble around the room gasping for relief.

The more he fights, the closer he feels at the foot of death. Visions begin to emerge, all those before him manifest from the raging flames and the dancing smoke. Voices eclipse his thoughts, darkness overwhelms his senses.

A cold yet warmth gathers at his chest. He's sees a figure standing above him looking down as he falls upon his back begging for assistance. But the figure does nothing to repress the violent strangle that holds.

His vision starts to blur, sweat pours from every gland. No ounce of comfort touches him. Doomed he is, doomed.

He holds dearly to life as his skin changes as if a chameleon of the jungle. All hope is lost, memories  embody themselves in the haze of smoke. Taunting his dying breaths as music begins to play at the edges of him mind.

Drawing madness to his already desperate attempt to keep alive. Screams of tragic agony clamber from the empty halls of his home. The screams draw nearer with each falling breath. His eyes adjusting to the scene at hand.

A daunting presence suddenly latches to his heart like the bite of dog.

He release his hands from his throat. A howl of suffering bellows from his gut. He rolls to his side, curling his knees to his chest. Tears fall with an agonizing release; he bears no thoughts of survival.
He reaches out with a dire hand.

Ghosts stare with eyes of gloom and smile of morose intent. Tears fall from them in silence, but not tears of the translucence. But tears of crimson, of blood.

He cries out to them as his heart is being crushed by a nameless force. Though air finds his lungs, death still seems to hold his breath, his body. But his vision comes too, his eyes adjust. He renovates his thoughts. Presses himself from the floor.

Looks to the enraged flames; coughing in the smoldering smoke. Points to the ghostly figures, the memories and berates their existences. He stands with vigor and inhales though the smoke gives no hope of breath. He closes his eyes; clenching his hand to his chest he grunts to the agony that bears itself upon his heart.

But upon the reopening of his eyes. All is silent, the flames have vanished, the haunting memories dispersed, and the ghosts are absent. He inspects the room with fearful curiosity, and upon his conclusion. He settles himself in the release of a breath and smiles.
confidence death depression failure fiction fortitude heart ache life love memories mistakes motivation perseverance poet poetic regret repression seattle short story story telling
Location: Everett, WA, USA