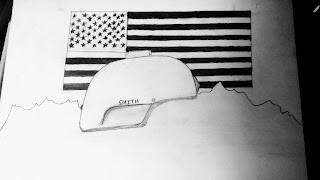 Three minutes and twenty seconds, the clock is ticking!

Survival is at the fore front his mind, his veins, rushing rivers of blood. His eyes constrict to the goal at hand. Gun fire resonates through the village like wild thunder; as it rains down on the now burning and motionless convoy. Screams and explosions take flight to the dusted sky.

The moon beams with a crimson radiance. Hill stops stand silhouetted in the foreground. Nothing is completely coherent in the moment. His thoughts collide in a wild fight to keep himself alive, he has only himself.

Communications have ceased do to debris from an explosion hitting his radio. His chest on a constant rate to feed his lungs air. His bodied pulsating to the rhythm of his adrenaline charged heart.

Bullets whisk by; only a few feet above his head. He watches the rounds buzz past him as they pop with an all too familiar snap. Watching, he takes a chance to see what threat he is against. Stuck behind a small wall he removes his helmet and raises it to the top of the wall. He waits for a brief moment; there is no visible threat that engages him.

In his desperate attempt to check for safety; he places his helmet back on. Raises himself slowly from the ground with his weapon gripped tightly. He peers over, and only about ten yards away is a line of mud huts. About forty percent of them have active shooters. Most whom appear to still be shooting at the convoy they had ambushed.

The stars clash with the moon. It's almost a tranquil night, as light shimmers upon the anarchy in a splash of bizarre exuberance. It is enough light for him to see the shape of his enemy. He has no time to bear homage to his fallen brothers. In all the chaos, he decides to attempt his only chance of survival. To crawl to his downed soldier and take up his radio.

He begins to crawl, keeping himself as flush as possible he remains looking forward. He focuses his thoughts on the success of reaching the radio. A few yards down the wall, there is a break in it. He stops, catches his breath, raises his weapon at the ready; an examines the exposed area of the wall.

As he looks, he sees a foot on the other-side. At first he is unsure if it is an enemy. Then, as he starts to slowly inch forward for a better look. The foot moves swiftly and from the break in the wall a weapon appears and a black flag hangs from possible threats hand.

Instantly he puts the pieces together, sweat covers his face as he caked in the unforgiving grounds of the desert. With no time to fully ID his situation; he fires three rounds into the target before him. The target drops instantly, his ears begin to ring. He can feel his heart press violently from his chest.

He remains fixed on the target, insuring its death. No movement comes from the downed target. He picks up movement once more while he approaches the target with caution. But not before insuring  safe passage passed the break in the wall. No visible threats appear from the other side.

He approaches the target and as he passes, his face grows cold, his body fills with shock; it is only a boy. His heart freezes, he cant seem to move. His mind screams, telling him to move, to go before he become the victim of his enemy.

His ears clear from the ringing of his gun fire. He shakes his hand and regains focus. Only another yard and he reaches the radio. But it is too late, the target was called incorrectly. His stomach knots as he looks at his watch counting down.

He jolts awake in hysteria, he flails about yelling. Nurses rush in trying to calm him. He looks around with a fearful thousand mile stare; and as he looks around, he tries to raise his arms, but he can't. The nurses can't calm him, they decide to sedate. His vision begins to blur; as he fades to the medication, he begins to ask what happened to his soldiers.
------
Thank you for reading! War is never what we want, never is it something we wish for. But in the hells of this world and in fight against belly of evil. Sometimes, war is all we have left.

I hope we can war brings tragedy to both sides. But let us not forget the sacrifices our people have made, past and present, to allow us the freedoms we have now. May we be continued to be blessed in this country and may war eventually become but a fragment of our freedom.

What have you been told what war is always about?

If you are looking to read more of my writings please grace yourself with a copy of:
A Man's Traveled Heart