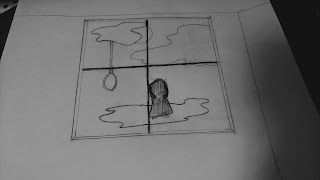 She is held in a limbo, a purgatory, a Ferris wheel she is forbidden to exit. A repeating scenario ensnares her eyes with shadowed glimpse of a figured torn from its body. A rope dangles in the flashing of a storm. Her window clatters against the violence of the wind.

Her throat tense in fear, her eyes wide in panic. She feels her limbs become dull, as if her bones are becoming brittle to the taxing taxation of uprooted love. Her heart, taken from the soil of her once opulent soul.

She feels herself drift like a ghost to the forgotten pages of dying memories. Her hands hold to nothing as she stares with gorged eyes of sorrow. Pale is the moon, as it waltz with the cavernous clouds of thunder.

And as she pours herself to the withered aches of her heart. She scrapes her thoughts from the addictive pleasures of what will be seized. As she is tortured in thought of what she restrained from  experiencing. She writes herself upon a blank sheet, with ebony ink into a dark limerick of herself.

She smiles with tears and becomes a woe child as she feels her innocence near its death. A choice in which she has no say.

And as the thunder crashes, the severed body dances, and the rope hangs. She clutches her hands to her gut. Ill she becomes, and pale as the moon becomes her flesh.

And as she writes her final words before she becomes a woman to the wills of evil. A tear seals the letter in which she writes herself. Quickly she places it beneath her bed, and as she does, the door to her chamber swings to the desire of her reapers innoccents.

And there before her, stands a man, dressed in a gown as is she. His eyes filled with lust, and as he approaches she is told to relieve herself of her gown. Her body begins to shiver, as she reluctantly watches as relieves himself of his clothing. And atop his head sits a religious wrap. His face hugged in the ragged grasp of an old beard.

And before her now, stands the man in his twisted picture of godly acts. Places this young girl at the foot of her bed. And in one single breath and in the silent shock of her heart, she is no longer the daughter of her father. But the flesh, of a lewdness of hatred.
----
Thank you for reading, please let me know what you think, positive or negative.