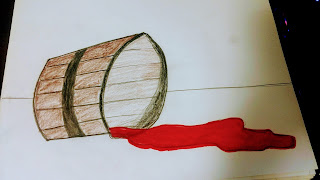 In a fit of rage he strikes him down; clashing him with his golden cup. His eyes lathered in deep fury, his flesh poised in the pulse of adrenaline praised anger. His jaw clenched so tight, a headache rises. But is quickly masked by his fumigating mania.

And there he stands, silent in temper, grasping his golden cup in a clasp of death. And now, at his feet lies his king. And with his body surging in violence, he wastes no time and in haste he drops his cup and begins to drag the body.

Slightly heavier than he, he struggles to first gain momentum to carry the murdered body of his king. But upon gaining foot, he pulls the body up the few steps that lay before the throne, and places his dead king upon it.

And in his now panicked hysteria as adrenaline has dissipated. He does his best to make the king look as if he has passed out from too many wines. But the kings body begins to turn pale, so he places the kings garments to cover his hands and face.

And upon his well thought plan, he smiles and looks at his design of deceit. But when her turns toward the table from which that had sat. He finds a trail of blood from the head of the king. It looks as if a brush soiled in paint of crimson has been dragged through the kings royal room.

A short stint of alarm latches to his lungs like a cold wisp of air. But he remembers, today, the king wishes to remain alone till after sundown. And no one knows of their meeting but each other. Again, a smile uncoils itself from his alarmed state and relief finds itself in the form of an exhaled sigh.

He quickly exits the chamber, runs down the hall to the kings tailor. Whom is also out for the day, he searches the room and finds the collection dyes of which the tailor uses. He quickly picks up a bucket of red dye, grabs a few pieces of clothing before leaving.

Runs back to the kings hall and begins to pour the dye over the kings trailed blood. But as he does, he finds himself covered in the dye upon his feet. But he has no time to worry, he then submerges the few pieces of clothing into the bucket of red dye. He then places them on the table, approaches the kings body, and begins to undress him.

Once his clothes are removed, he dresses the king in the still wet clothes, he had dipped in the dye. But again, upon his frantic attempt to cover his murder and lies. He finds himself now covered in head toe with red dye. But still, he has no time to care.

And upon his finishing touches of his now poor cover up. He makes his way out of the castle, but from the rear, doing his best not to be seen. But upon his exit their is a small girl, no more than the age of four. He freezes for a moment, the little girl looks him with strange curiosity and the man tells her off.

And upon his return home, he thinks himself a genius. But in only a days time he is found by the kings guard. And in his capture that very next day, he pledges it was not him.

And as they pull him from his home, there, just outside his door, is the little girl, and there next to her stands a guard with the mans golden cup.

And there next to the guard, stands the tailor matching his dye to the trial of red from the kings hall to the mans home.
-----
Thank you for reading, what lies have you told that you thought you got away with?