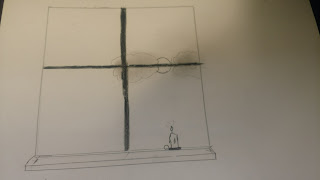 His slumber is deep, his heart is light. But in the midst of a midnight hour, a knock reaches his door. He quickly wakes from the resounding sound of the knock. His eyes slowly adjust to the pitch black surroundings. He turns to the left side of his body, reaching into the darkness feeling for a candle.

In his blind state upon the dark night, he finds the candle at the edge of his night stand. His steady but somewhat worrisome tact, he almost knocks the candle from its rightful place. But he catches it with the embrace of his index and thumb. He reels it in with slight struggle and sits up in bed.

Again, he hears the knock. His head promptly turns toward the noise. He stills himself as he listens for the knock once more. But it ceases, and as the silence coats his home in an eerie hold. He leans to his left once again and opens the drawer to his night stand. A distinct sound of old wood composes itself from the drawer.

Once opened, he reaches through the shadows and finds a box of matches. He quickly pulls the box from the drawer and strikes one upon the box. It lights with little effort, his face becomes hugged by the shallow light of the match. The flame wavers with each passing breath he releases. He lines the match to the candle and lights the wick.

Once the candle is lit, he places the match with the remains of ashes from in old cigar that sits upon the night stand. Smoke rises in short burst, it moves as if it is a snake. Now his room is lit, enough for him to see the entrance to his room. He carefully presses himself from his bed and listens for the knock. But there is no knock, just the creaking of the floor. As he carefully postures himself from the bed.

But as he begins to cautiously move toward the entrance of his room. A loud crack hits the window to his room. He turns toward the sound in fright, but with intent to defend himself. But he sees nothing, nothing but clouds and the moon dressed between them.

But he approaches to investigate, his breath curling from his mouth in a cloud of cold mist. He steps only a few paces before reaching his window. Again, a loud crack rings from his window, he leaps back. But this time, he sees something, it seems a small object has hit his window. He walks closer to the window, with the candle outstretched. He looks out, and there, at the foot of his house, is his friend.

Upon his discovery he opens the window and asks what his friend is doing. His friend tells him to open his front door. He places the candle down on the windowsill and makes his way to his front door. Chilly, he rubs his hands together and breathes into them as he approaches the door. He grabs the handle, twists the lock and opens the door. And there, before him stands his friend, his eyes filled with what appears to be heavy grief. As he looks at his friends he asks is everything okay.

His friend drags in a heavy breath before speaking. He release his breath with a quick but steady exhale. He reaches into his pocket and pulls out a letter. His friend hands him the letter and tells him to open it. He opens the letter, reaches in, and unfolds the contents of the letter and begins to read it.

And in a short paragraph, it explains grieving condolences and the sad result of their best friends suicide. Though much pain swells in this moment, neither has words to say, he closes his door and screams into his dark empty den.

Now, his heart beats heavy and still to this day, there are no words to be said.
-----
Thank you for reading. Hope this had something to give you. If so, what was it?

If you find any of my writings interesting, then you shall find, A Man's Traveled Heart to do the same.