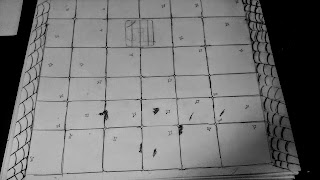 A verse is nothing more than a verse, when shaded from skies. What intention one gives it is no matter if he, the care taker of the verse allows no planting of such verses he has written. If a poet is to shelter his dominion what is the existence of his words? If not nothing more than a string of letters crumbled together in a symmetrical and orderly fashion.

Are words meaningful if not shared with the wallowing eyes of others? Are they heard, like the tree that fell in the woods? Even if one is to write for himself and himself alone, in the confines of his chambers, do the words truly heal? Or is it upon the rationing of these words to others that bring meaning, that bring healing? For, if no other is present to see a poets transformation from his dull living space, to something of the utmost prestigious growth one can have from words.

Has he truly grown, or is he still who he was before his thoughtful verses? For if no other sees him, from what he once were, to what he is now, how does he know he has surpassed his own dwelling? How does he know his words bring remedy if no other has consumed his words and felt cure of melancholy?

For even scientists, must have guided supply of medicine among a controlled population to see results. If one is healed, but the rest die, is the cure effective?

How can we ever know, for many poets cling to their own heads, their own existence, as if that is all that there is. Pouring their heart and soul from ink onto a canvass that bears no ears, no heart. What can come of such a poet if they are not heard?

I fear madness would devour them, clouding their judgement slowly. Leaving them in turmoil in fear that their words are no more worthy than what they say of themselves. Much disdain would follow suit in such unholy obssesion.

For a brief moment, I could see his heart swell with joy upon his first few thrilling creations. Pieces that draw his deepest, darkest, and most gut wrenching despair from his blameful base. Finding a taste of what life has been snuffed by years of neglect, filth that has been released and cleansed from his soul.

But what does one do when there is no discussion of the meaning behind it all? When the only thoughts to speak of is his own. How does one find growth in thought, in design if he leads a life of solitude from debate?

Does his heart not run dry, does his ink not became stale in the absence of experience, of experimentation? The lacking use of his own voice would dwindle to an insanity of living in his own mind. Drooling upon words as if an inflicted patient seized to the constraints of padded walls an misery.

So if I must say one thing from this thought, be not the poet that jails his words as much has he jails himself.
----
Hope this brought some thought to your mind, what was your favorite part, let me know! :)

If you would like to read more of my writings please grab a copy of, A Man's Traveled Heart
Also don't forget to follow me on Facebook, Twitter, and check out my YoutTube channel