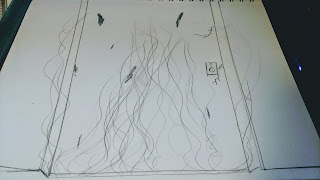 A puff of smoke billowed from beneath the door, it flowed with the iridescent lighting that subtly pierced the cracks of the door. My eyes locked to this privy moment. As the smoke rose, an eerie presence approached the air before me. I could feel my skin wishing to curl up from my bones.

But something kept me moving forward, I could not deny the thrill this moment was giving me. And as I advanced my steps in a quiet methodical manner, I saw shadows cutting off what little light escaped framing of the entrance before me.

The closer I got, a strong scent coiled up my nose. It smelled of sour milk, iron, and burning hair. My throat curdled with the instinct to reject such a smell.

So I covered my nose with my shirt, even then, I could smell the aroma. But it was almost palpable between the scent of my cologne and my own scent. But still, I gagged slightly with each approaching second.

The closer I got, the thicker the smoke became. Its almost, as if it knew I coming. The shadows ceased to move when I became arms length from the door.

The handle of the door hung loosely from its mount. It looked as if it had never been touched in years. Dust coated it quite thickly, It looked as if insects had even found a home among this old frayed door.

But I ignored the unsightly view before me and continued to allow my curiosity to pull me. Before grabbing the handle, I carefully placed my hands on either side of the door.

Supporting myself, I placed my right ear gently upon the door. But as I did, the smoke ballooned at my feet and surged to my lungs.

I did my best to hold it in. I quickly pressed myself from the door and tried not to cough. My heart began to race in fearful anticipation of being heard.

I mustard every muscle in my body to keep myself silent and not rupture from the chocking smoke. But my lungs were filled to the brim. I could feel the heat of the smoke pulsating.

And just before I released my cough, the appalling aroma crowded my senses as I could no longer hold in my breath through my mouth. I released my lungs and out came a loud obnoxious cough. It sounded as if I broke the sound barrier upon its release.

Instantly I became frightened, for what ever is on the other side of this door, has surely heard me. I started to step away slowly. Sweat started to seep from my brow, my eyes dilated crowded fear. And as I walked away, the door opened with a creak.

Out came a massive cloud of smoke. A disembodied voice began to speak. Suddenly, I could not move. The smoke enveloped me, it pulled me toward the door. My feet, slightly dragging along the old wooden floor.

And as I got closer, a tall skewed figure stood within the smoke. My heart leapt from my chest upon feeling its horrid manifestation. I detested its aura, I could feel death streaming from it like swarms of locus through a dying field. My eyes drew to its voice, but I could not see its appearance. Its hand pointed to my right  as I was held frozen in the smoke.

The ghostly figure did not lower its hand till I turned my head to my right, the smoke cleared. And what stood before, or might I say laid before me. My own body, with my own heart pulled from its chest in a clearly precise surgical manner.

I could not comprehend what I saw, my mind drew in utter chaos. I began to speak to the anonymous figure. But it would not respond. I could not move, I could no think. My body overcome with complexity and trepidation.

And as I stood frozen, the smoke began to clear from the figures head. It stepped close to me, enough for me to see it and as its head peered through the clearing smoke. I saw it, I shook with doubt, with horror,

For this figure
wore my face.