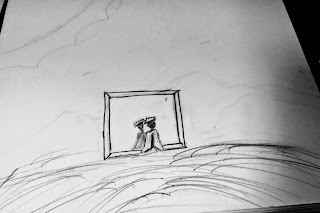 A man of highest praise was he. His kingdom filled with gold and every pleasure his mind could ever conceive. And with these riches came his finger of greed, his ego along side it. Greed and ego became great friends, they fed off each other like addiction. Always wanting more, in the constant need of a fix.

Conquer many lands did he. And as his kingdom grew, so did his greed, his ego. He was the best dressed, the best spoken, educated, and best looking. But he never left the confines of his kingdom, and his father before him, allowed no mirrors.

One might find this odd, but not his father. For his father became in his own reflection, as does this king, the son. After conquering the last kingdom that was approachable by land. The king decided it was safe for him to pasture out into the world.

He had his soldiers guide him to the first kingdom he conquered. And along the way he made sure to boast about his achievements to all he passed. Every village for five hundred miles had eventually seen him in person for the first time. Many scoured at his presence, many cared not, for they were too busy with life to pay him mind.

While praising himself for what he did, he surely thought the women would woo over his presence. But few did, most were utterly displeased with his arrogant tone. But those women, those with the taste for riches, for flesh, those whom were youthful in skin. Found him to be an arousal of the flesh. They gladly poured themselves upon him.

Whispering tributes to his conquering success. But also, did they know how to speak to his ego, his greed. He lied with as many women that would allow him to.

But foolish in his greed, his ego, he made sure the men brought all his treasures with him, so that he may show is riches to the world.

To present what he thought was brilliance. And in his naive state of successful euphoria, he lost all sight as to what those around him.

With each stop, the young lustful women would seduce him, and in thinking it was his doing. He would proudly display his riches to them. But he would not allow them to touch.

But in constant need for flesh, for gloating. He became blind to the greed of those before him. While lost in the cravings of women, those in the villages would steal from his carriages of gold. His own men, outraged by the greed of their king.

They would turn their back upon the thieves. But with only one condition, leave the first carriage filled, for he only displays that one.

And with each stop, his riches became less and less. Drunk upon temptations and spirits he never found out. At least not till he saw his reflection for the first time. And upon his last stop before reaching his first conquered kingdom, he was presented a mirror by an old women. Upon looking to it, he was quickly enticed by what he saw. Upon seeing himself, he drew a large grin.

He followed his finger along his chiseled chin and became lost in his presentation of himself. And as he looked, he called his men and villagers to see such a wonder.

But what he did not know, is that in his hour of being consumed in his reflection. He was alone, everyone, even his men abandoned him.

The village had gathered themselves inside the carriages that once held gold. And when he turned away after growing bored. He saw all was gone, and he became enraged with anger.

"How dare they leave me, their king, I have given them everything! I am their king, their provider, I am a conqueror."

And in his shallow delivery, two men on horses approached. They were silent, the king demanded they speak up, but they did not. The men surrounded him, and these men, were merely thieves looking for treasure.

And though he be a king, they believed him not, for he had no guards, no banners of his crest. They dismounted their horses, pulled their blades from their sheath. The king pleaded for his life. But the men ignored him, piercing his gut over and over, till he choked on his own blood.

But upon his last breath, one of the thieves had a necklace that hung close enough to the dying king that he could see his reflection. And as he died, seeing his reflection, he smiled, and thieves took what little jewelry he wore.
----
This was a little longer than usual, but I couldn't let this story run short. What do you think, did you enjoy it?

If you are looking to explore more stories like this, please endeavor to adventure into
A Man's Traveled Heart