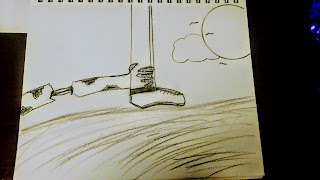 I don't know where to take this. This corpse of mine that drags at my feet. It holds at my ankles with much desperation though it is dead. I can smell its stench with each fading second, but I have become null to it. Its grip, hollow, but somehow clings to me as if I am a God. And I hear it pray behind its rotted teeth that I will raise it from death.

I try to ignore its spoiled flesh, its barren voice. But I am drawn to it when the world becomes a haven for burdens. I listen to it with regretful intent. And when I listen, the hills before me, grow that much higher. I become a thimble of a man, pressed heavily with anguish. With the constant battle of what is no longer, as I clasp with aspiration to create what will be.

And this corpse, in its moments of declaration for wishing existence once again. I rage in my voice that it will shut up. That it will release itself from my ankles and let me walk in peace. But in just the moments I stop. Where I turn to yell at it. I give hours for the hills to build. And in doing so, I fall to its feeble tone. And in the gift of mere glimpse of my presence, with my head turned. The corpse smiles as it holds me still. It looks up as if I will give it my hand and pry it from my ankles.

But I do not, and in this fruitless exhaustion of yelling. I accomplish nothing, I see only its festering body wafting with a pungent smell. I see its peeling skin raise from the bone, exposing it for what it truly is. Truly, it is but the extension of myself, my horrid past bleeds from. The screams of my hell crest over the wounds of this vile thing. And I feel, as if I should answer it, that it is but my duty to comfort it.

Though, only empty holes lay where its eyes once lived. The void they present brings guilt upon me as the corpse smiles with its putrid grin. And in that single moment of guilt, I listen a little longer, I forgive it a little more. I say it is I, and it is I who must release you. But in that guilt, I feel an odd sense of comfort.

That in this feeling, it would be okay to sit, to lie down and converse with this repulsive creature and hear its plead. But I know I mustn't, for it is a mere shadow. A scarred slate that can no longer be marked. That it must be forgotten and forgiven, though it may always be a shadow in my view.

But how do I release what is still me?
------
How do you get past the things that hold on to you?